Between the waters of the Atlantic and Pacific Oceans lies the territory of the United States, which today is one of the most visited tourist destinations. Whether you prefer the islands of the Hawaiian Archipelago, a New York City vacation or an adventure in the city that never sleeps – Las Vegas, the 50 states of America have something to offer. In this article, we will offer you some of the most beloved and beautiful places in the United States, which should be at the top of your vacation list. 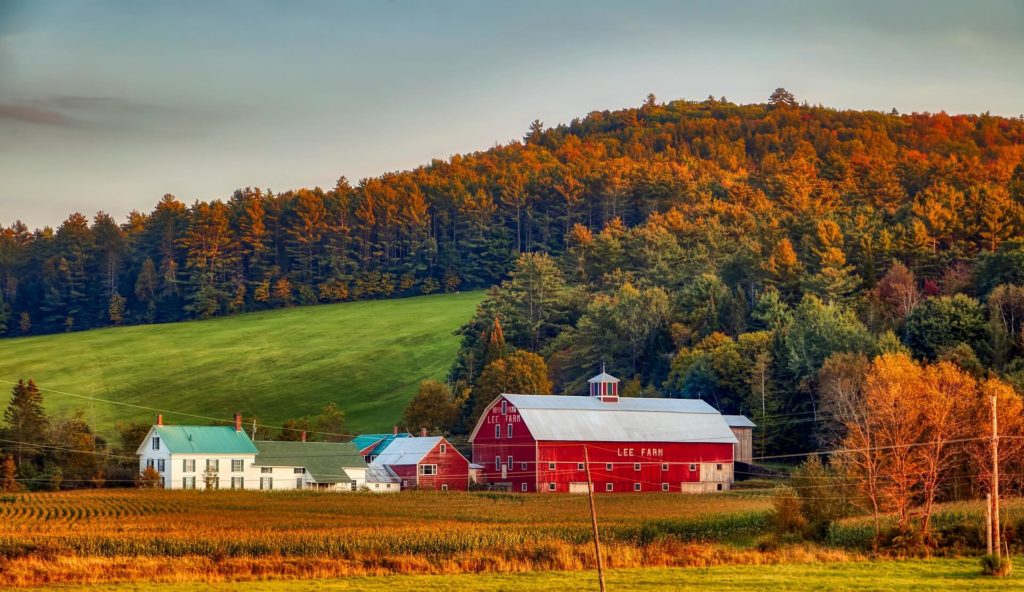 New England is one of the oldest populated areas in North America and covers several states – Connecticut, Maine, Massachusetts, New Hampshire, Rhode Island, and Vermont. The walk here guarantees you many historical and cultural monuments and landmarks, as well as amazing natural views.

Within New England, you will find both agricultural towns and peaceful provinces, as well as picturesque beaches. Boston is one of the most important cities here. Each state has its own trademarks – if you want to learn more about the American Revolution go to Massachusetts, Vermont is one of the most beloved winter resorts, and Rhode Island is a great place for a summer vacation.

Stretching between the lands of Lake Erie and Lake Ontario, this part of America is rich in natural attractions, but also includes metropolises such as New York and Washington. Undoubtedly, the apotheosis of the natural landmarks in this area is Niagara Falls on the border with Canada.

There are also several mountainous areas ideal for long hikes, climbing, and adventurous vacations – perfect examples are Adirondacks and Poconos. Smaller cities like Buffalo and Baltimore also have a special charm, and Atlantic City – called Las Vegas in the east – is the perfect place for a fun city vacation.

The South is known for its hospitable people, music events, and festivals such as Mardi Gras, rather than for its natural attractions. Some of the most visited cities are Nashville, Memphis, and New Orleans, where some of the most colorful, traditional, and filled with music and entertainment celebrations take place.

Although the city part is what the South is famous for, there are still plenty of natural places to look out for – the Great Smoky Mountains, the Mississippi Delta, and the impressive Appalachian Trail.

In many places in South America, you will find historical landmarks from the time of the Civil War and the struggle for citizens’ rights after that, you will have the opportunity to learn more about slavery in these lands and many other historically significant events.

The beautiful beaches of Florida, the warm climate, and the beauty of the Gulf of Mexico make this part of the United States one of the most popular for a summer vacation. Fort Lauderdale, Miami, and Orlando offer premium resorts surrounded by beautiful scenery and beaches. If you want a more exotic vacation, the islands of the Caribbean Archipelago are just for you.

Midwest is often referred to as ‘America’s heartland’, whether because of the rural areas or the typical atmosphere of the American countryside. Here you will also find the Great Lakes – an ideal transition route.

The choice of places to relax and walk is also huge – Indiana Dunes National Park, the slopes of the Ozarks, or the Boundary Waters’ shores.

Texas definitely has something to stand out on this list – a huge cultural and historical heritage, huge size, distinctive culture, and a strong sense of belonging to the locals.

Surrounded by forests, hills, and rivers, some of the most popular cities are Dallas, Houston, and San Antonio. The locals have a particularly warm and friendly attitude towards tourists, which definitely contributes to the increased interest in the state.

Despite the amazing natural views, the Southwest is also home to the “city that never sleeps” Las Vegas.

The ‘Golden State of California is one of the most diverse states in America. With cities like Los Angeles and San Francisco, as well as the favorite of all movie stars Hollywood, with beautiful sandy beaches and the rocky hills of Big Sur, with Joshua Tree, Redwood, and Yosemite National Parks, you have an endless choice of outdoor activities.

Some of the biggest attractions (besides Hollywood) are the Golden Gate Bridge, Napa Valley, Santa Barbara, San Diego, and Alcatraz in San Francisco.

If you are a fan of winemaking and quality drinks, you will be able to enjoy the large wineries that offer tours and tastings in the Napa Valley.

The states of Oregon and Washington, which are building the Pacific Northwest, have extremely impressive landscapes. Beaches and the distant mountainous areas covered with dense vegetation are extremely magnificent. These places are especially suitable if you are keen on hiking, swimming, fishing or climbing.

There are also two nature parks – Mount Rainier National Park and Olympic National Park, which in addition to the early flora can also boast of impressive animal species.

If you still decide to have fun in an urban atmosphere, choose Seattle (where Amazon, Starbucks, and Microsoft are headquartered) or Portland, where there are many resorts, music and theater performances, and first-class restaurants.

The Rocky Mountains are one of the most beloved nature parks in America. On the border between Great Plains and West Coast, the area boasts three national parks – Great Sand Dunes National Park, Glacier National Park, and Yosemite National Park.

The long mountain chain passes through different climatic zones, diverse flora, and fauna and covers 4 states – Colorado, Idaho, Montana, and Wyoming. Most towns along the Rocky Mountains are small and rural. The largest city is Denver.

Your vacation in this area will provide you with the opportunity for long hikes, all kinds of outdoor sports, and, of course, amazing natural views.

Alaska is a very different place from everything mentioned so far. The state is separated from the United States by Canada. The icy tundra, mountainous areas, and forests create the kind of terrain that seems like taken from a winter fairy tale.

Glacier Bay National Park and Denali National Park are among the most visited nature parks in the largest state in America, and it is possible to see many wild animals (brown bears, wolves, Moses). Among the sports preferred by tourists are kayaking, hiking, and fishing.

A vacation in Alaska will definitely be a challenge and an adventure, but it is worth the effort because of the views that can only be seen here.

The volcanic archipelago of Hawaii is located in the Pacific Ocean and is one of the most popular tourist destinations in the world. Each island has its own charm, but each offers beautiful beaches, wonderful views, places to relax, and beach sports.

Among the most visited attractions are Hawaii Volcanoes National Park on the Big Island, which is also the largest island in the archipelago, and Waikiki Beach in Oahu. Honolulu is the capital of the state and as expected, most tourists pass from here on their way to the smaller islands.

You can also indulge in adventurous activities such as a helicopter flight to see the hard-to-reach places during your stay.

No matter which part of the United States you visit, you will not be disappointed. Vast nature, hilly and wooded areas, sandy beaches, or urban types of entertainment are just some of the things that await you.

Whether you prefer a more secluded place to stay or a first-class luxury resort, museums and concert halls, or long hiking trails, you will find it here.

Research in advance the places you want to visit so that you are properly equipped when it comes to hiking in nature or so that you do not line up for tickets for cultural events. However, be sure to be prepared to take countless photos, because each view is worth it.

59 Best National Parks in the USA

15 Best Attractions & Things to Do at Lake Tahoe

Attractions & Things to Do in Fremont, CA