A massive column of rock protrudes from the green tropical forest in the heart of Sri Lanka. Its 660-foot height is adorned with frescoes, graffiti, and landscaped gardens. Sigiriya (see-gee-REE-yah) is the name given to the rock, which holds a special place in the island’s cultural history.

It was built over 1,500 years ago as the stronghold of a rogue king, and today the Sigiriya complex is one of the earliest preserved examples of ancient urban planning. Although the rock was ultimately unable to save its king, it did manage to preserve ancient Sinhalese culture.

Archaeological evidence indicates that religious communities lived in the area as early as the third century BC. Sigiriya is a few centuries younger, having been built by a non-royal consort for King Kasyapa, the son of the previous king. 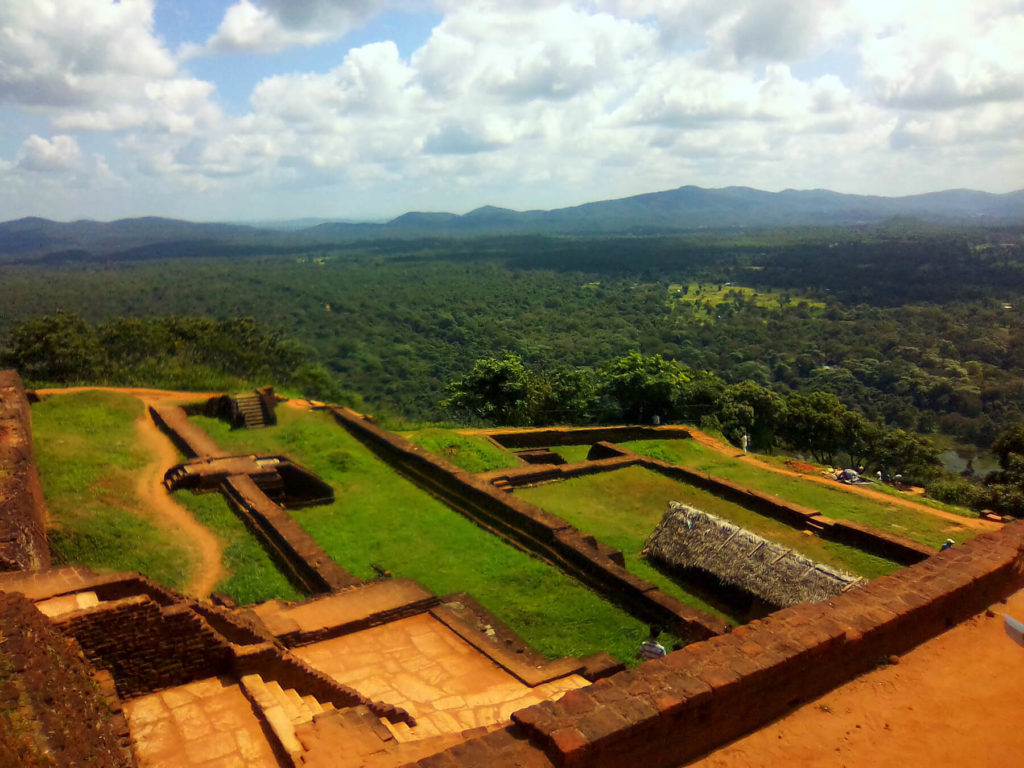 In 477 AD, Kasyapa assassinated his father and seized the throne from Moggallana, his half-brother and heir. Fearful of his brother’s vengeance, Kasyapa fled Anuradhapura and built the heavily fortified city of Sigiriya – the thick walls and moats are still visible (see the Google map below), and he built his impregnable palace-fortress atop the granite rock. Canals and other water features were added to the area where the aristocrats lived, as well as beautifully landscaped gardens. Kasyapa spent 11 years at Sigiriya building an extraordinary capital city.

Moggallana did indeed come to do battle with the King. King Kasyapa committed suicide by cutting his throat during a battle he had little chance of winning. Moggallana, his brother, evidently became king and restored Anuradhapura as the capital. He abandoned Sigiriya to the monks, which resulted in its eventual abandonment. It was not until the early 1800s that colonial archaeologists discovered the site, and large portions of the ancient city remain unexplored. 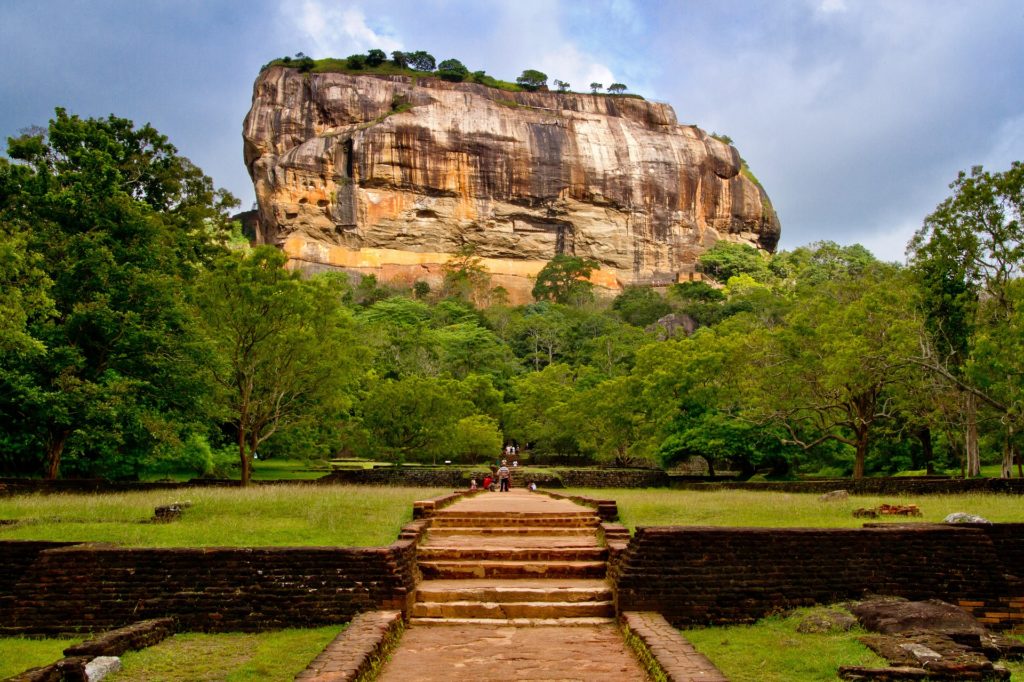 Entry to Sigiriya costs around $30 USD per person.

The ticket office for Sigiriya is located on a side street adjacent to the main fortress entrance and is open from 6:30 a.m. to 6 p.m. It’s easy to miss, so make sure you visit this first to purchase your tickets before you head up the stairs to the complex.

There is no method of payment other than cash, and since there is an ATM next to the ticket office, you should not count on it working.

When to visit Sigiriya rock. Best time of year and day

Between late December and the beginning of April, Sigiriya is the best visited during the dry season with optimal visibility and weather conditions in March.

That said, this is also the hottest time of year; we visited Sigiriya in mid-April and there is no way to adequately describe how oppressively hot and humid it was, even at 8 a.m.! Pack as many fluids as possible, as well as sunscreen and a hat.

Additionally, keep in mind that this is also peak tourist season, which means that large crowds are to be expected. We’ve even heard stories about the stairwells becoming so congested that the one-hour climb became closer to 2-3 hours!

What is the best time of the day to visit Sigiriya?

Sigiriya is open every day from 7 am to 7 pm (the ticket office closes at 5pm).

You’re going to miss sunrise regardless. The gates do not open until 7 a.m., which means that reaching the summit (an hour’s climb) in time for an epic sunrise is a moot point. However, by climbing later in the day, you can do a great sunset action. 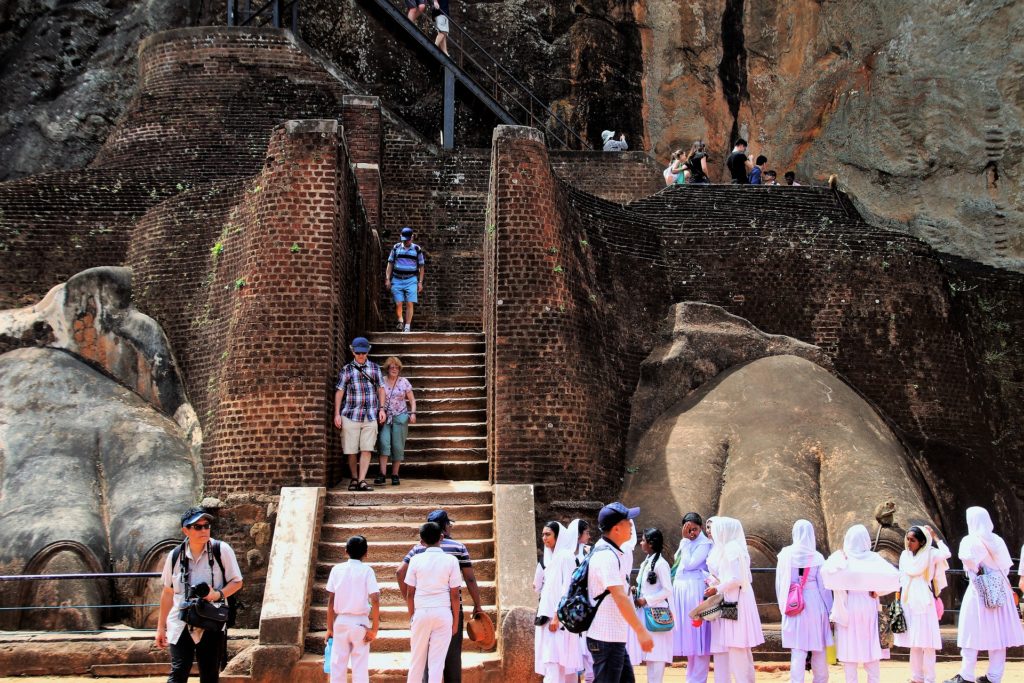 How to beat the heat

Obviously, the later afternoon/evening climb up to the Sigiriya is an excellent chance to avoid the hard heat of the day. Sunset visits also ensure you enjoy cooler weather during your descent, rather than the early morning sun.

The majority of the people tend to visit Sigiriya from morning to afternoon.

Sigiriya gives you essentially 360° view of Central Plains, so where the light is coming you won’t necessarily dictate (particularly for those interested in photography)

You can visit pidurangala at sunrise

While the views from Sigiriya are spectacular, nothing beats the sunrise view of Sigiriya and the Central Plains from Pidurangala. We’d approach the two independently by visiting Sigiriya at sunset and Pidurangala at sunrise!

How long does it take to get to the top of Sigiriya rock? What is the duration of the Lion Rock hike? 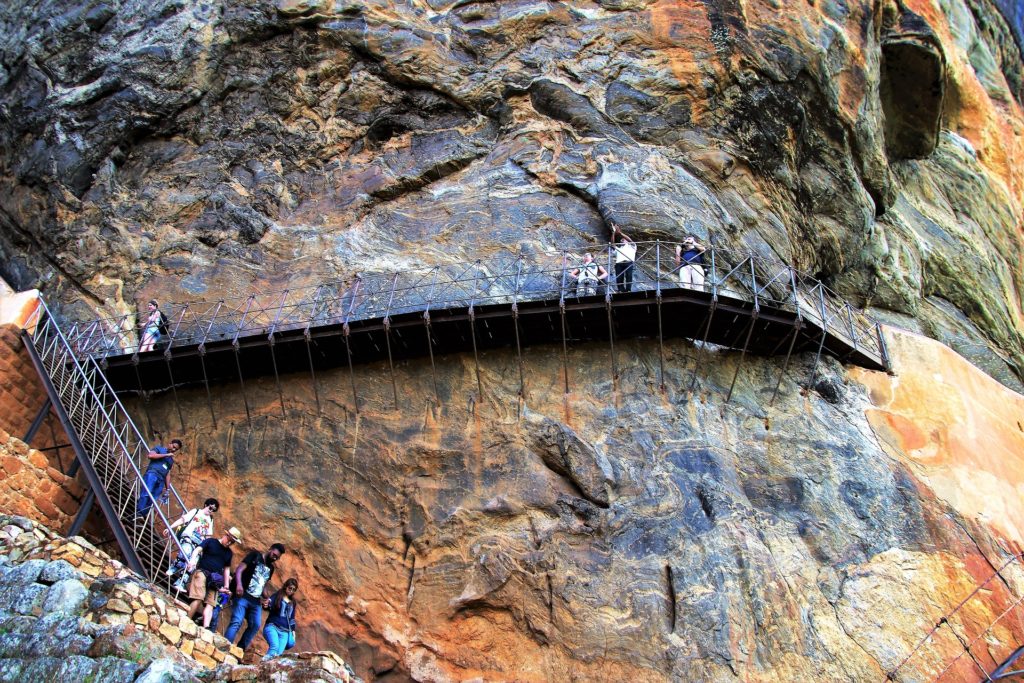 This is entirely dependent on your fitness level and desires to thoroughly explore the site.

Those with an acceptable fitness level who are also stopped by the way should be able, in 60 minutes, to complete the +1000 steps.

However, consider adding another 30 minutes to enjoy the gardens, explore the ruins at the top, and about 40 minutes for your descent. We would recommend to set aside for your visit for at least 3 hours.

5 The Sigiriya Rock in Sri Lanka: What Nobody Knows

1. The city was constructed entirely on top of a 200-meter-tall boulder.

Around the fifth century in Sri Lanka, King Kasyapa, who possessed an enormous set of nuts, decided to build a city atop a 200m-tall giant rock. Why is he doing this? He was actually born to a non-royal concubine and inherited the throne with no legitimate heir. However, this did not stop him from assassinating his father, walling him up alive until he died, and seating his giant nuts on his new throne. His decision to build in such an absurd location was motivated by his desire to defend himself against his brother, the legitimate heir to the throne.
On top, a ruined city was discovered with houses, farms, and even a 52-meter-long water reservoir where they grew plants, washed and drank.

2. One of the stone walls is so perfectly polished that the king can see himself reflected in it.

To bathe in the glory of his coup, King Kasyapa had one of the stone walls lining the walkway to the top polished to the point where he could see himself reflected in it. The aptly named mirror wall’ can still be viewed today, though it is not as polished as it once was. Nowadays, it’s exceedingly difficult to find dependable employees.
I can only imagine the king standing at the highest point of his kingdom, butt-ass naked, and waving his giant cock at his enemies below, not only for conquering the throne but also for polishing granite into a mirror.

3. It’s standing over a huge bunch of claws and looks like a huge lion

As if having real lions on a rock wasn’t enough, King Kasyapa had a massive set of lion claws constructed near the base of the boulder so that when visitors looked upward, they could imagine the entire rock was a giant lion.
To emphasize the point, he then named it Sigiriya, or Sinhala, which literally translates as Lion Rock. To add to the intimidation factor, they even had ‘boulder farms’ at the top filled with massive rocks that were dropped on any adversaries who dared to challenge the lion. In immortal Dante’s words, “Dude, you can get past a dog.” Nobody has a fling with a lion.”

4. They were so advanced with their water garden system that they could pump fresh water all the way to the top.

There were a number of water gardens at the base of Sigiriyah, filled with rainwater and from the nearby lake. While this was convenient for those living at the city’s base, they required water to reach the top. King Kasyapa and his architects created a network of stone reservoirs and water pumps that used pressure to transport water from the ground to the sky city. The main pipe ran directly beneath the largest pool, bubbling up from beneath the surface. Additionally, some of the pipes were designed to run behind stone benches, cooling the stone and providing residents with air-conditioned seating.

5. The sides of the rock were once covered in massive frescoes.

By allowing an entire 140 m long 40 meter high wall to be covered with giant frescoes of the naked women, King Kasyapa decided to further the extravagance of his city’s life. These murals were extremely detailed, with elaborate bodies, faces, and hairstyles adorning the naked characters. Some of these paintings, which are quite racy, are still visible today as a testament to their quality and preservation.
As a tip, refrain from photographing or filming these as you will be immediately assaulted by local security guards, as yours truly was. If you need to escape this situation, wrestle your camera away from them and then delete the files to ensure there is no record of the incident. Then, when you put up a drone to capture additional footage, ignore the elderly white tourists shouting “haven’t you learned your lesson?”