Nothing particularly innovative has occurred in the building of statues of great height. Since ancient times, taller statues have been constructed, and as a result, there is a notable impact on the respective country’s tourism industry. Many of these taller statues around the world are memorials to well-known people or notable historical events. These structures are high to make them the city’s most important attractions. Many people believe that the Statue of Liberty is the tallest statue in the world, but it does not even make the top ten list. Consequently, in this article, you will discover 20 of the world’s tallest statues.

The Statue of Unity, which depicts Indian statesman and independence activist Sardar Vallabhbhai Patel, is the world’s tallest statue at the moment. The statue, which is located on a river island opposite the Sardar Sarovar Dam in Kevadiya colony, was inaugurated by Prime Minister Narendra Modi on October 31, 2018, the 143rd anniversary of Mr. Patel’s birth.

Spring Temple Buddha is the second highest statue in the world, representing Buddha’s Vairocan statue. It is created in the center of a lotus-shaped throne. The construction of this statue, which is located within the Fodushan Scenic Area, began in 1997 and continued until 2008. The statue stands atop a hill that has been reshaped to accommodate two additional pedestals. The total cost of the project is estimated to be $55 million, with approximately $18 million going toward the statue alone.

Laykyun Sekka is one of the largest statues in the world standing on the 13.5-meter throne. It’s a great structure in golden color of Gautama Budhha. This statue was built between 1996 and 2005, taking 12 years to complete. In February 2008, the statue had been officially visited.

Ushiku Daibutsu, which was constructed in 1993, is also among the world’s tallest statues. On a lotus platform, this Buddha statue is positioned. It is currently ranked among the world’s top five tallest statues. The bronze sculpture depicts Amitabha Buddha. It was constructed to commemorate Shinran’s birth, the founder of Buddhism’s “True Pure Land School”
Depict: Buddha (Amitābha)
Height: statue: 100 meters (330 feet) including base: 120 meters (390 feet)
Location: Ushiku, Ibaraki, Japan
Coordinates: 35.9827°N 140.2203°E

Sendai Daikannon is a large Nyoirin Kannon gem-bearing statue, located in Sendai, Japan. This is Japan’s tallest goddess statue and one of the world’s top five highest statues. At the top of the statue showing the Bodhisattva Cannon of Shingon Buddhism there is an elevator. This statue’s construction was finished in 1991.
Depict: Kannon (Guanyin)
Height: 100 meters (330 feet)
Location: Sendai, Japan
Coordinates: 38.3005°N 140.8236°E

It is China’s fourth-tallest statue and the sixth-tallest on the planet. This gilt bronze idol portrays a bodhisattva who embodies all Buddhas’ compassion. The Ningshan County Government invested 260 million Yuan in 2009 to finish the construction of this statue, with the assistance of local business and religious organizations.
Depict: Guanyin
Height: 99 meters (325 feet)
Location: Weishan, Changsha, Hunan, China
Coordinates: 28°11′5.8″N 111°57′48.1″E

The Great Buddha of Thailand, also known as The Big Buddha, is Thailand’s tallest statue, the second-tallest in Southeast Asia, and the seventh-tallest in the world. Phra Kru Vibul Arjarakhun, the first monk leader of Wat Muang Temple, ordered the statue to be built. The realistic Buddhists contributed funds to the construction of this monument. This statue can be seen from a long distance, bringing the location a lot of attention.
Depict: Buddha (Gautama)
Height: 92 meters (302 feet)
Location: Wat Muang, Wiset Chai Chan, Ang Thong, Thailand
Coordinates: 14°35′35.6″N 100°22′40.0″E

Also known as the Dai Kannon in Kita no Miyako park, Hokkaido Kannon is also among the 10 highest monuments in globe. It’s Japan’s third highest statue. The construction began in 1975 and was finished until 1989. The monument consists of a lift in more than 20 levels. Most of the floors feature sanctuaries and places of prayer and a platform with magnificent views of the area.
Depict: Kannon
Height: 88 meters (289 feet)
Location: Ashibetsu, Hokkaido, Japan
Coordinates: 43°31′41.4″N 142°11′53.1″E 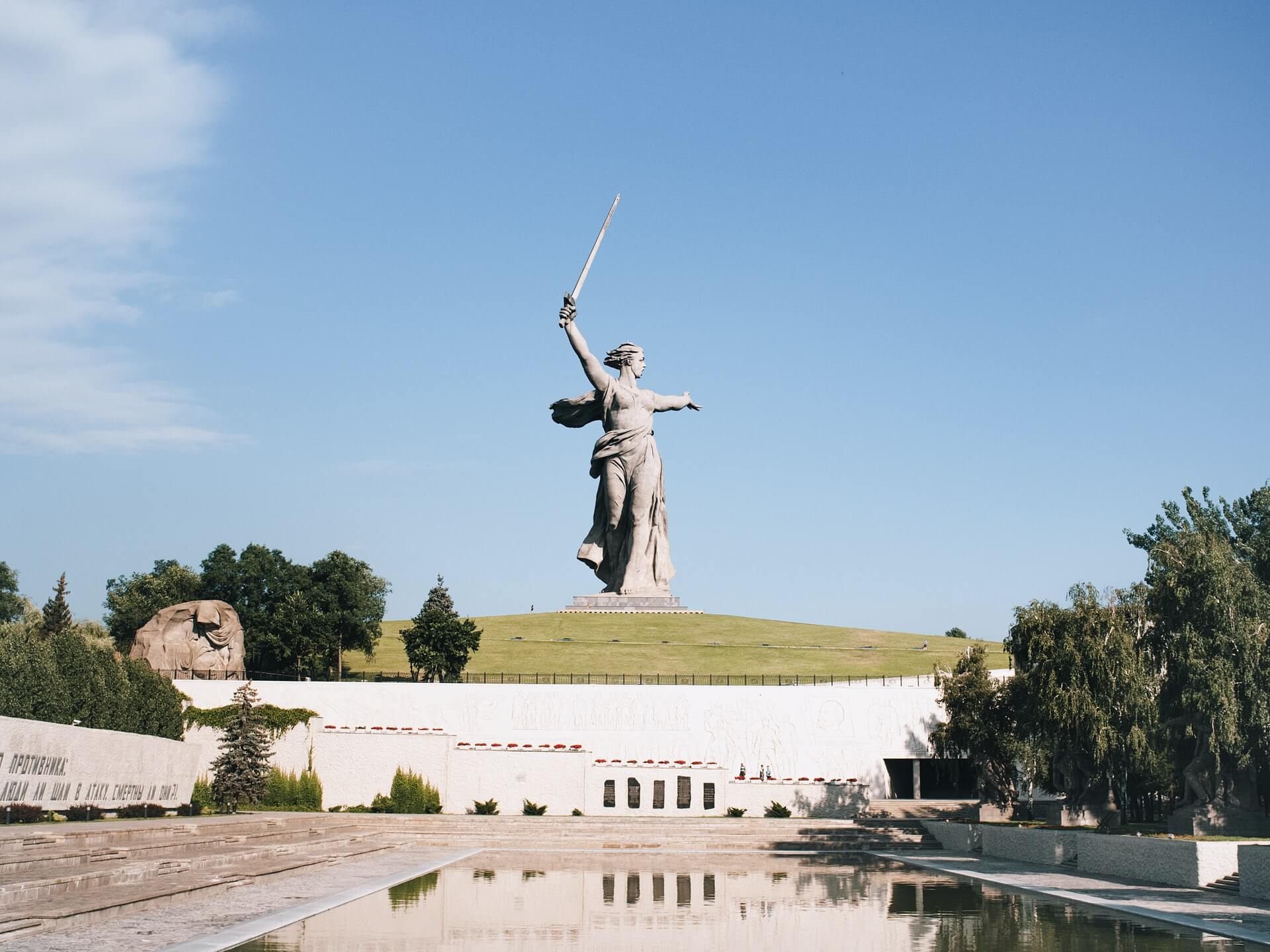 The Motherland Calls is the world’s largest female statue and one of the top ten tallest monuments in the world. It is an allegorical depiction of the Motherland pleading with her children to defy the invader and continue their assault. The monument is highly complicated from an engineering standpoint, owing to its unusual structure, which has a sword lifted high in the right hand and an outstretched left hand used to summon someone.
Height: 85 meters (279 feet)
Location: Mamayev Kurgan in Volgograd, Russia
Coordinates: 48.7423° N, 44.5370° E

Japanese citizens constructed very large Buddhist statues during the “Bubble Economy” period, starting in the 1980s. These were built in tandem with and by various commercial firms that wanted to make money off the ever-increasing interest in visiting temples. This statue on Awaji Island is known as the Heiwa Kannon, or World Peace Kannon. It towered above the inland sea at a height of around 80 meters. It also had several museums on different floors, including a museum of automobiles and a Japanese sword and armor museum. A lift took one to the observation deck on Kannon’s breast. It was built by a property developer who hoped to connect it to a temple whose pagoda-like structure was under construction when the photo was taken, so that the statue could obtain tax breaks in that way. Visitors didn’t visit the site in enough numbers to keep the statue and associated facilities in the black. The developer of the Bubble Economy, faced with failure, had to try to sell it. The result was a downward spiral and closure. Currently, the structure appears as a memorial to the more interesting aspects of the 1980s economy and to the times in which gigantic statues were of interest.
Depict: Kannon
Country: Japan
Coordinates: 34.5029°N 134.9767°E

The Lingshan Giant Buddha is a symbol of Wuxi City, which is located on the northern bank of Taihu Lake. “Lingshan Grand Buddha Scenic Area” is named after Xuanzang, a well-known Chinese Buddhist monk in the early Tang Dynasty (A.D. 618-907). The Lingshan Shakyamuni Buddha, completed in 1997, is 88 meters tall, of which the statue is 79 meters, and the lotus flower pedestal is 9 meters. Nodding at Taihu Lake, this wonderful Buddha smiles happily and watches over all the living creatures.

The beautiful goddess Guanyin statue can be found in Sanya, China. The sculpture stands at a height of 108 meters. The Guanyin of the South Sea of Sanya was officially inaugurated in 2005. The landmark is close to Nanshan Temple, another important religious shrine. For those who are unfamiliar with Buddhist culture, the statue’s appearance may appear unusual.
Depict: Guanyin
Country: China
Coordinates: 18.2927°N 109.2087°E

The statue of Buddha in Thailand is shorter than the world’s tallest seated Buddha, but it is also much larger. That said, it is one of the biggest and second-largest seated Buddhas in the world.
Depict: Buddha
Country: Myanmar
Coordinates: 17.3183733°N 97.0281018°E

Garuda Wisnu Kencana is Indonesia’s tallest statue, the world’s tallest statue of a Hindu deity, and the fourth-tallest statue in the world when its massive base is included. Nyoman Nuarta, an Indonesian artist and sculptor, proposed a truly audacious project in 1990: the construction of a massive statue of the Hindu deity Vishnu riding his eagle-like mount, Garuda, in southern Bali. He quickly gathered some influential supporters, and by 1993, he had enlisted the support of Indonesia’s President, General Suharto.
Depict: Vishnu riding Garuda
Country: Indonesia
Coordinates: 8.81404°S 115.1670°E

Mount Jiuhua is one of China’s four holy Buddhist mountains, situated near the city of Chizhou in Anhui Province. A bronze statue of Ksitigardha Bodhisattva is located on this peak. The whole mountain is dedicated to the Bodhisattva Ksitigarbha.
Depict: Ksitigarbha
Country: China
Coordinates: 30.5390°N 117.8042°E

Kaga Kannon is located in the town of Kaga, Ishikawa Prefecture. It stands 240 feet tall above a hill next to a temple dedicated to the Goddess Kannon. The Temple is also adjacent to a hotsprings hotel, which contributes to the statue’s popularity with travelers seeking to see the Goddess and then relax in a hotspring.
Depict: Kannon
Country: Japan
Coordinates: 36.3257°N 136.3489°E

In the philosopher’s hometown of ‘Nishan,’ the monument was unveiled. Confucius was born in Shandong, China, around 551 BC. The statue towers above the Statue of Liberty in New York City. According to some, it is now the world’s highest Confucius statue. The enormous structure’s construction started in May 2012 and was finished earlier this month. Tourists are welcome to see the monument, but an official opening date has not been declared.
Depict: Confucius
Country: China
Coordinates: 35.4955°N 117.2053°E 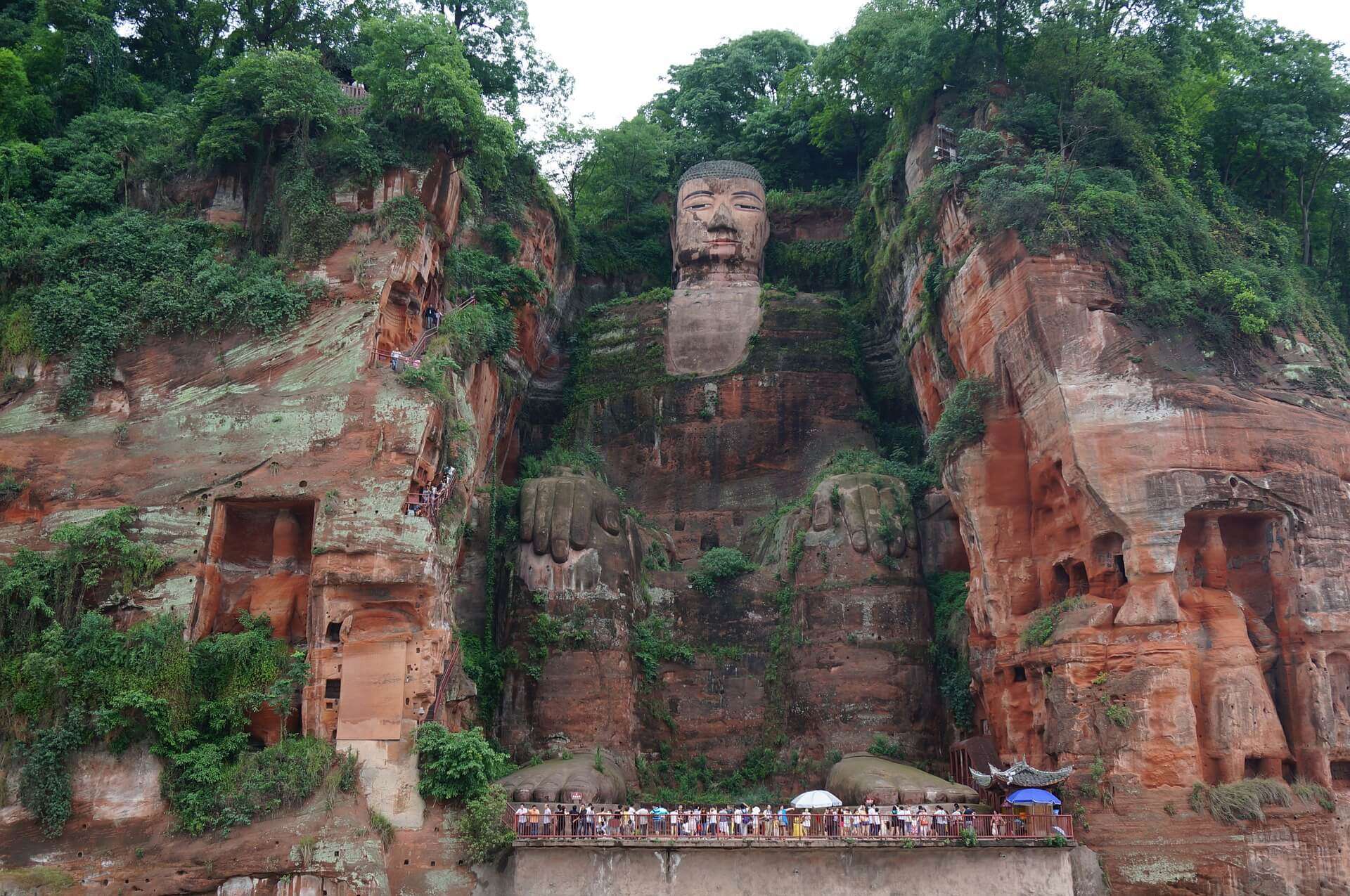 The Leshan Giant Buddha is a seated statue of Maitreya (a Bodhisattva who is often shown as a very fat monk with a wide grin on his face and his bare breast and paunch on display). The Buddha is situated east of Leshan City in Sichuan Province, near the confluence of three rivers: the Min, the Qingyi, and the Dadu. The statue has established itself as the city’s most well-known picturesque attraction. UNESCO added the Buddha’s location on the list of World Heritage sites in December 1996. Begun in the Tang Dynasty in 713 and completed in 803, the statue took more than 90 years to sculpt. Thousands of employees have devoted their efforts and knowledge to the project throughout these years. As the world’s largest carved stone Buddha, the Giant Buddha appears in poetry, music, and tale.
Depict: Buddha
Country: China
Coordinates: 29.5472°N 103.7692°E

Finally, but certainly not least, Chao Mae Kuan Im is the world’s twentieth-largest statue. The statue, which is housed inside the Chao Mae Kuan Im Shrine, is somewhat unknown in comparison to the other idols on this list. Chao Mae Kuan Im, which stands at 69 meters, was presented in 2016.