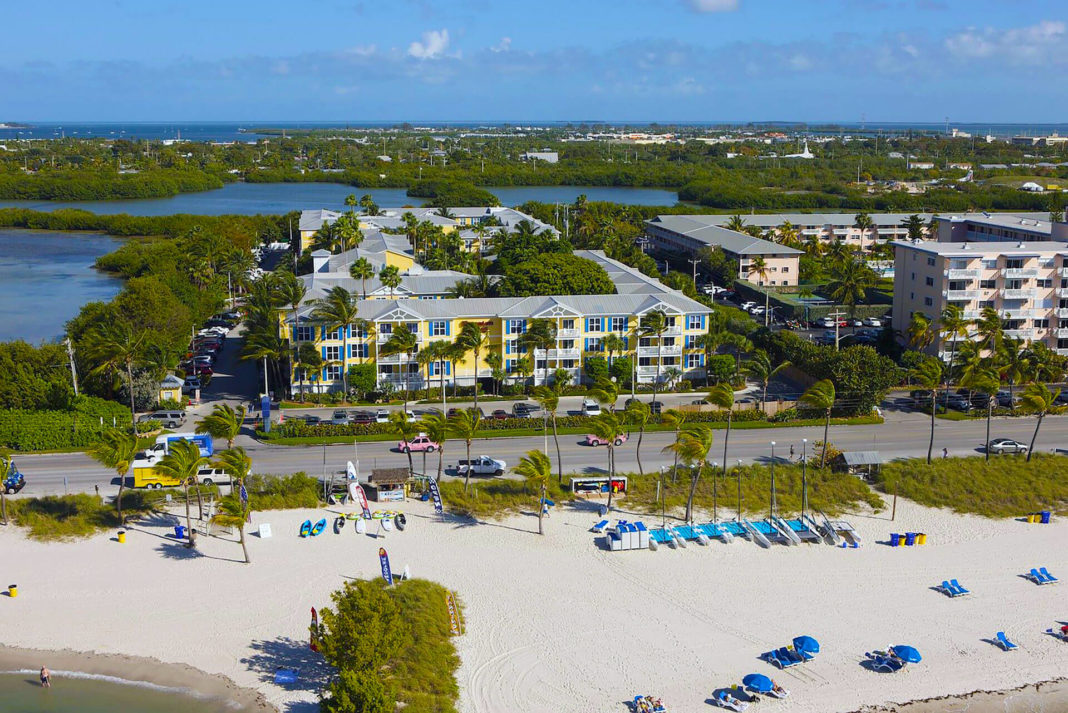 South of Miami stretches over 110 miles of beautiful sandy beaches and coral reefs called the Florida Keys. The island chain was once connected by a railway but was destroyed after a hurricane in 1935. 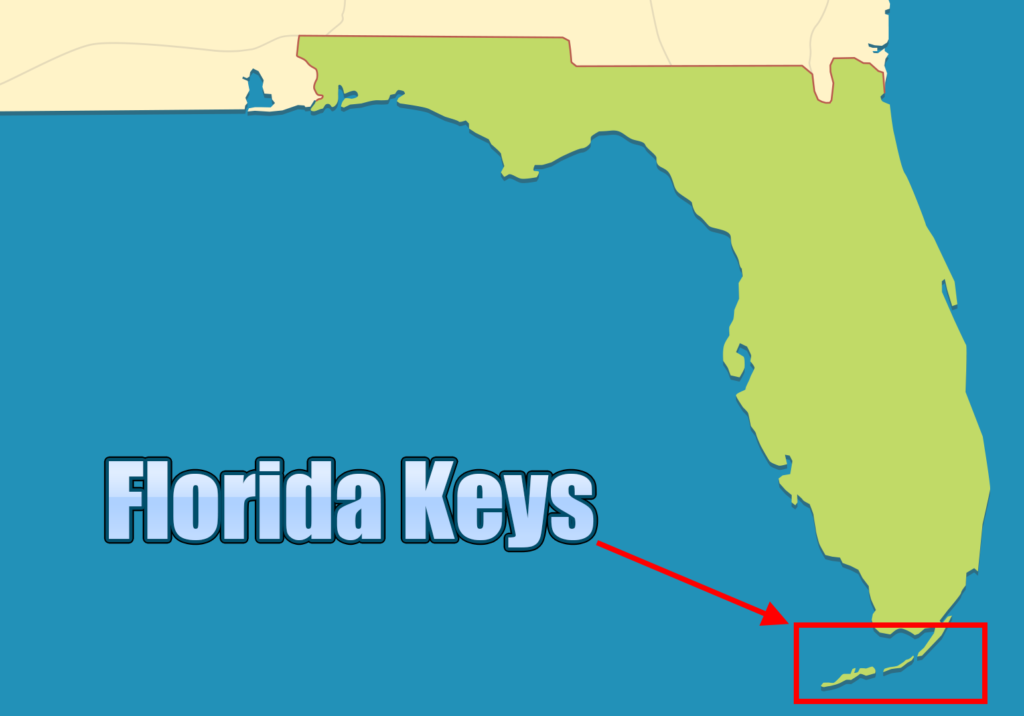 Today, 42 bridges connect the beautiful islands, ideal for water sports, snorkeling, and a relaxing holiday at a five-star resort. 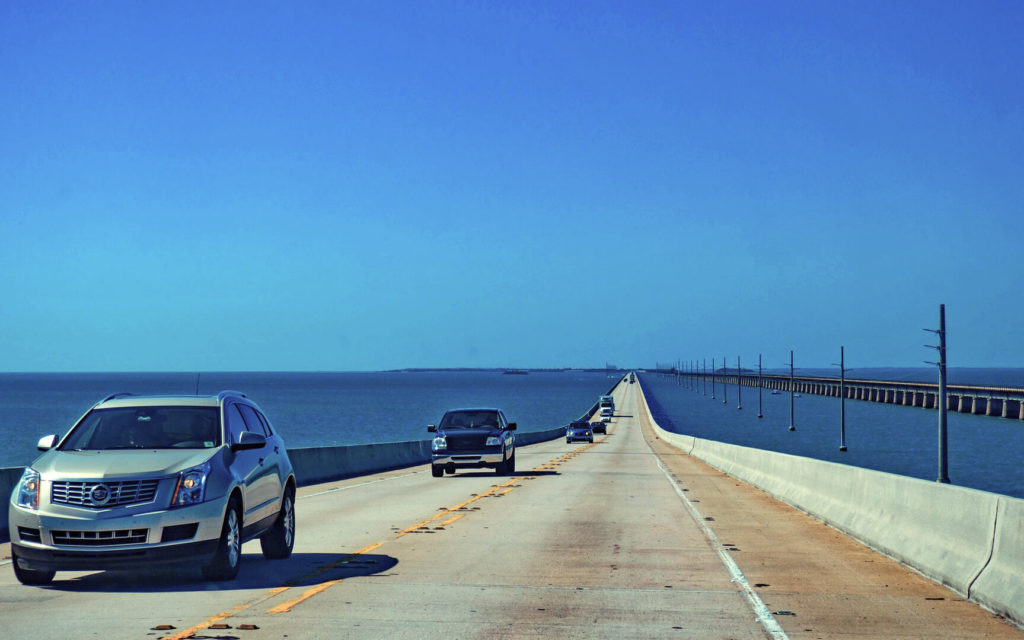 Many tourists associate the Florida Keys only with Key West, but there is much more to see here such as.

Lying off Biscayne Bay are much smaller islands but deserve your attention as part of Biscayne National Underwater Park.

If you are a history buff, you will not be disappointed – thanks to pirate ships, memories of many past adventures are preserved here.

We have selected a list of the most exciting attractions and the most beautiful places to visit in the Florida Keys. 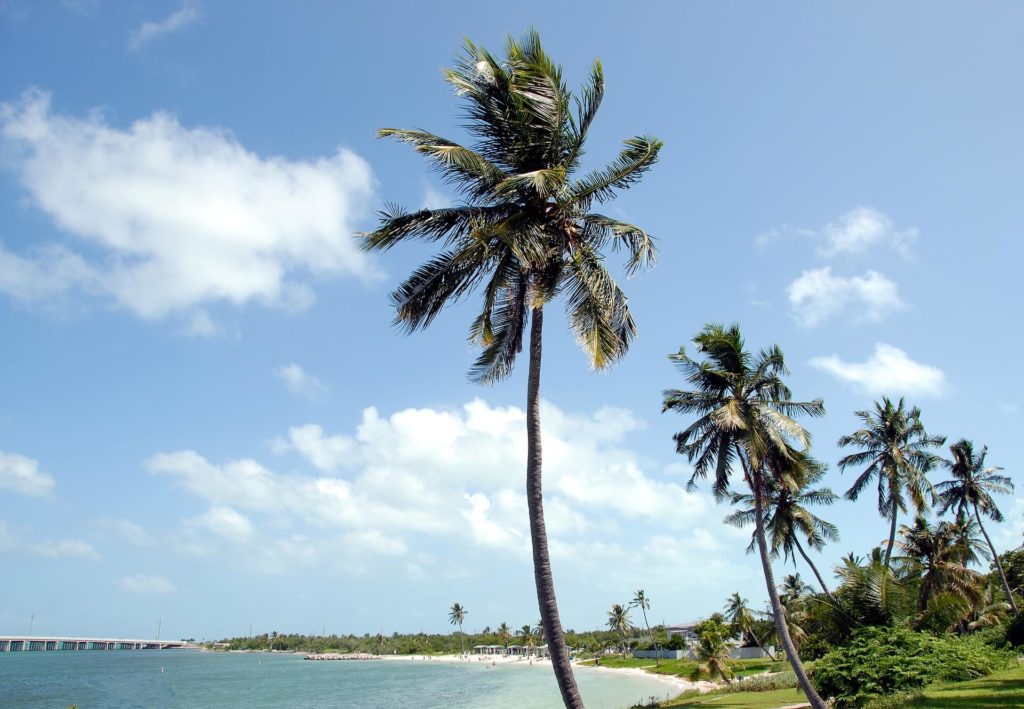 Bahia Honda State Park has some of the most beautiful beaches in all of Florida. The beach is divided into two zones – one overlooking the ocean and one facing the old railway line. The beach stretches over 400 acres and is ideal for snorkeling lovers. There is a camping area nearby and ideal picnic areas with the family.

One of the most educational things to do in the Florida Keys is to visit the home of writer Ernes Hemingway in Key West. The house preserves parts of the original furniture, including 17th- and 18th-century Spanish-style furniture.

part from the fact that you can choose a tour of the house itself, the gardens also deserve attention. There are many different types of plants here, as well as over 40 cats living here, descendants of Hemingway’s cats.

Located in Old Town Key West, this square is known as a place of liveliness and festivities during the beautiful sunsets over the Gulf of Mexico. Entertainment varies from tightrope-walking cats and dogs on unicycles to dangerous nimbles such as swallowing swords.

It also houses the Key West Sponge Market, including a small museum that tells more about the sponge-harvesting industry.

Mallory Square is also the last stop on the sightseeing route, which introduces you to the great sights of Key West.

If you are interested in animals in their natural habitat, this is one of the best things to do in the Florida Keys. Located between Marathon and Key West, Big Pine Key houses the National Key Deer Refuge. This species is endangered, and the reserve was established in 1957.

Here is the Blue Water Hole, where you will see turtles and alligators.

Here you will learn a lot about the process of rehabilitation of wounded turtles. The hospital was opened in 1986 and to date has cared for more than 1,500 turtles affected by tropical storms.

Visitors have the opportunity to make a 90-minute tour with a guide, during which they will learn about the diet and treatment of turtles and see the sea turtle rehabilitation tanks.

In Marathon you will find everything for an ideal vacation – the place is easily accessible by charter flights, ideal for sport fishing, kayaking, and jet skiing. Last but not least, you will enjoy some of the most beautiful beaches and restaurants with amazing ocean views.

Marathon is also the local commercial center. Some of the most popular attractions here are Turtle Hospital, the Dolphin Research Center, and Aquarium Encounters.

If you want to learn more about marine species such as Atlantic bottlenose dolphins and California sea lions, this center is the right stop for you. More adventurous visitors can swim with the dolphins, and the rest will learn a lot from the sessions during which trained staff interacts with the dolphins.

The Key West Butterfly and Nature Conservatory is home to over 60 species of butterflies living among various exotic plants.

The conservatory has over 20 species of birds, as well as a Training Center, where you can learn a lot about the life cycle of butterflies, see live all stages of their development and enjoy the beauty of their transformation.

If you are interested in underwater flora and fauna, this is one of the things to do in the Florida Keys that you should not miss. The John Pennekamp Coral Reef State Park and the Florida Keys National Marine Sanctuary have been a major stop for divers for years because of the rich underwater world and the wreckage of wrecked ships.

The park also has a small beach dotted with mussel shells, but this is far from its main attraction. On arrival, you will have the opportunity to find out about the local underwater inhabitants at the Visitor Center, as well as choose from a guided tour (including a glass-bottomed boat tour).

There are great places to picnic and relax nearby after such an exciting adventure.

Located 70 miles from Key West, Dry Tortugas National Park is an archipelago of seven beach-ringed islands, frequented by many snorkeling and diving enthusiasts for its beautiful coral reefs and the wreckage of wrecked ships near the beach.

The most popular places for snorkeling around are Historic Coaling Pier, Little Africa Reef, Windjammer Wreck. Along the entire length of one of the islands, you will see the massive 19th-century fortress of Fort Jefferson, towering majestically over the beach.

Duval Street is a place for shopping, walking, and visiting local galleries. It stretches from Mallory Square to the Southernmost Point marker and will offer you a wide selection of cafeterias, souvenir shops, and art galleries.

Several festivities are held here each year, including the Hemingway Days festival and the Fantasy Fest in October. Here are some of the most famous attractions related to local history.

Another reserve created to protect endangered species in these latitudes – Crocodile Lake National Wildlife Refuge in Key Largo is home to the endangered American crocodile.

Founded in 1980, the Refuge provides the ideal natural habitat for this species, living among mangroves, hardwood forests, and salt marshes. Unfortunately for many tourists, due to the sensitive natural conditions, the reserve is not open to the general public, but only to researchers and volunteers.

More than 6 miles of trails, the majority of which are paved and suitable for bicyclists, wheelchair users, and families with children, are available in the park to accommodate visitors. As you make your way along the trails, you will have excellent opportunities for bird watching and photographing wildlife. The nature trail can be explored on your own, and signs along the way will provide you with information about what you are seeing. If you prefer, you can join a ranger-led tour to learn everything you need to know about the park’s fragile ecology.

The Florida Keys Overseas Heritage Trail, which runs parallel to US Highway 1 (which has been designated as a National Scenic Highway), is a (mostly) paved 90-mile trail that stretches from Key Largo to Key West, inviting and encouraging walkers, hikers, skateboarders, and cyclists to come and enjoy the area’s spectacular scenery. There are several fishing bridges along the way where you can drop a line to catch your dinner, and there are also kayak launch areas. The trail provides access to a large number of attractions in the Florida Keys, including the Everglades National Park, Biscayne National Park, Crocodile Lakes National Park, and a number of others. You will find private campsites as well as campgrounds in some of the national parks along the route if you want to camp while traveling the route.

Fort Taylor, which was originally constructed around 1898 and served in active duty until 1947, is home to the largest collection of sea-coast cannons in the United States, some of which date back to the Civil War. You can picnic, swim, and snorkel right next to the historic fort, but you’ll need water shoes to walk on the finely crushed coral sand that’s on the southern tip of Key West. By participating in the guided tour, you can learn about the history of Fort Taylor and its role in the American Civil War. The fort’s highest point provides spectacular views of the ocean, and there is a small aquarium on the premises that you should visit before you leave.

The John Pennekamp Coral Reef State Park is one of the most popular attractions in the Florida Keys. It was the first underwater protected park in the United States. The park covers an area of about 70 nautical square miles, which includes open water, spectacular coral reefs, mangrove forests on the shore, and tropical hammock forests in the distance. Scuba and snorkeling enthusiasts can spend days exploring the coral reefs, which are overflowing with marine life, in the area. A glass-bottomed boat tour is available for those who don’t want to get their feet wet. Camping and a picnic are also options, as are canoeing and kayaking, as well as short hikes and other water-based activities

The Key West Aquarium is a must-see for any visitor to the Lower Florida Keys who is interested in marine life. In the aquarium’s indoor mangrove forest, visitors can learn about the crucial role that mangroves play in Florida Keys ecology. One of the aquarium’s many interactive exhibits. A wide variety of marine life, including game fish, sharks, tropical and tropical fish, turtles, jellyfish, and colorful reef fish can be found. It’s a great opportunity for kids of all ages to get up close and personal with a variety of fascinating creatures, including sharks, in the petting tank. Take advantage of the regular shark and stingray feedings at the aquarium.

You can take some impressive photos of yourself at the Southernmost Point monument in Key West next time you’re in the Florida Keys. The monument marks the most southern point of the continental United States (excluding Hawaii and some other islands) and is worth a visit. Although the message on the marker is accurate, there are other points on Key West Island that are further south, but these are located within the Key West Naval Air Station, which is not open to the public and therefore not accessible to tourists. Although the monument itself is not particularly noteworthy, it is surrounded by a diverse collection of hotels, bars, restaurants, and other tourist attractions that make it worthwhile to pay a visit.

Florida Keys is a great escape from the hectic city life. Here you can find a balance between secluded beaches, adventurous adventures, educational programs, and places to relax.

There is no lack of luxury resorts or places dedicated to art and history. Water sports enthusiasts will find their little paradise among beautiful beaches, and divers will have the opportunity to meet closely with local marine life and shipwrecks.