Turkey is a country of contrasts, where you can see two worlds – European and Asian. This Balkan country is full of ancient monuments from the empire parade, interesting culture, delicious food, and rich history that amaze everyone. Not to mention the beautiful seaside resorts, with hot sun until mid-October, and the majestic mountains, and the arid steppe. There are so many things to do in Turkey – a famous tourist destination all over the world. In it you can enjoy the Byzantine and Ottoman glory of Istanbul, on a city holiday, laze on the beach, or take a deep look into the history, wander through ruins like Ephesus or see some of the most fantastic panoramas in the world, such as Pamukkale and Cappadocia. The tourist attractions in Turkey are so amazing that they look like scenes from a fairy tale. Among all this diversity, we have chosen those places to visit in Turkey that have earned the fame of the best: 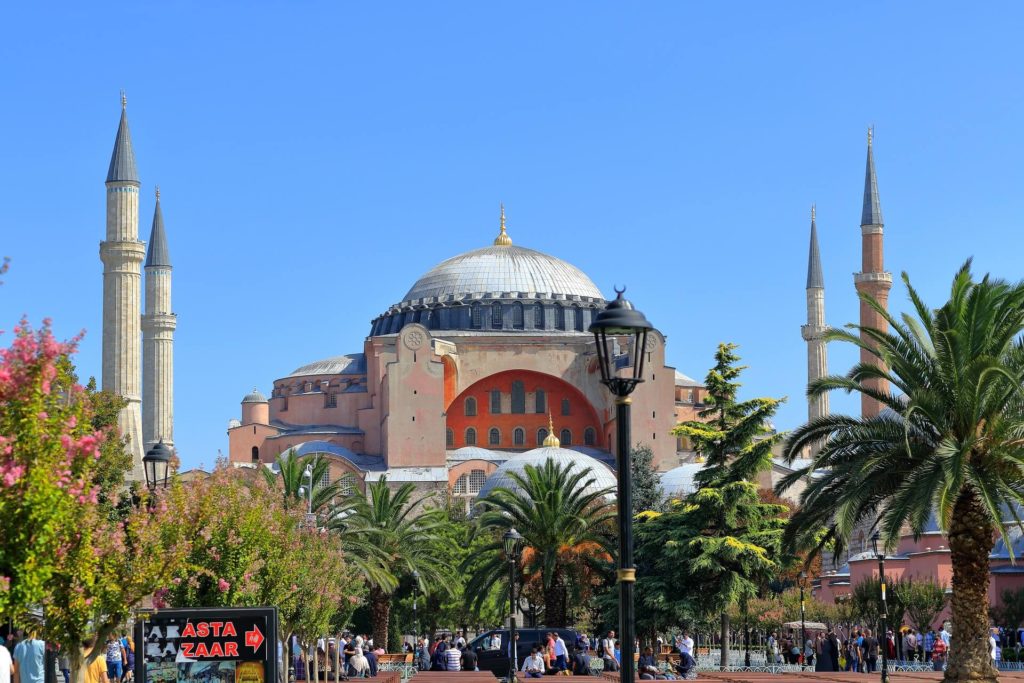 This famous monument is definitely a must for anyone who decides to visit Turkey. The uniquely beautiful mosque is known as one of the most beautiful buildings in the world. This is Hagia Sophia – translated to English, Saint Sophia. Built by the Byzantine Emperor Justinian in 537 AD, it is still recognized as the greatest architectural achievement of the Byzantine Empire. To this day, it remains the largest mosque in the world. Its splendor inside and out, with the slender minarets, added after the Ottoman conquest, and the captivating interior with frescoes is a symbol of the power and glory of old Constantinople. 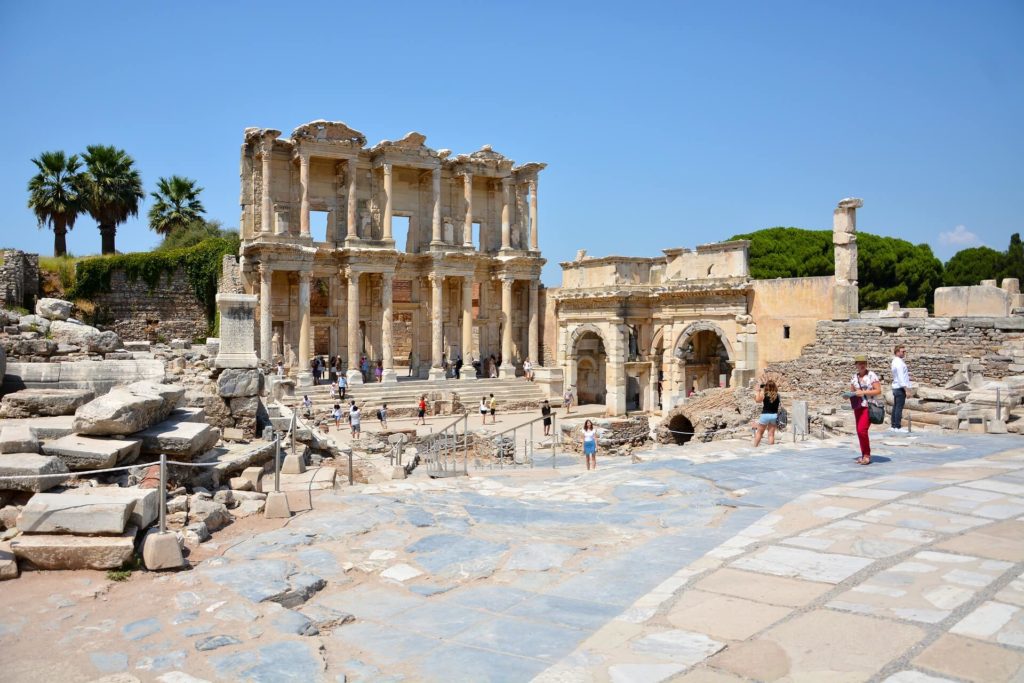 Ephesus is one of the most famous ancient cities in the Mediterranean region. This is the place where you can feel what life must have been like during the golden age of the Roman Empire. Ephesus is one of the best places to visit in Turkey because here you will feel the thrill of the mighty ruins, colossal monuments, and roads with marble columns. The history of the city of Ephesus dates back to the 10th century BC, but the main monuments you can see today date back to the Roman era when it was a thriving commercial center. To be able to see all the sights here, take at least half a day to be able to cover at least the main highlights, including the Library of Celsus, the complex of houses with terraced frescoes, and the Great Theater. They are clear historical evidence of the richness and importance of Ephesus during the Roman period in these places. 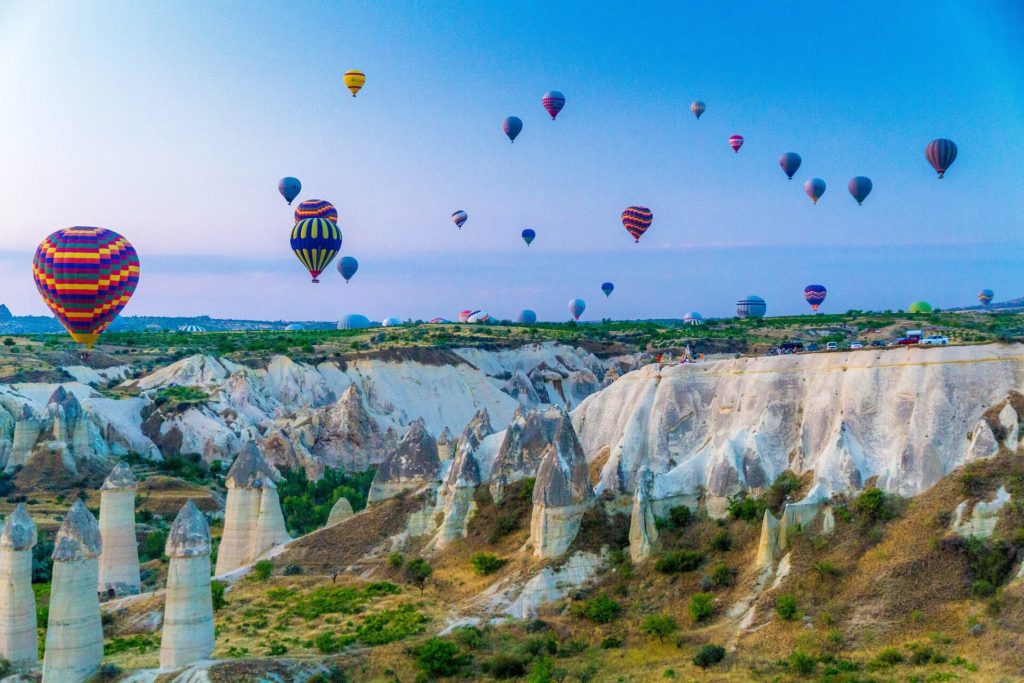 Looking for a fantastic landscape? Welcome to the towering rock valleys of Cappadocia – a favorite place for many photographers from around the world. You will be captivated by the rocky ridges and hills, the undulating rocks and peaks carved into the rocks, churches formed over thousands of years by the unsurpassed elements – wind and water. Visit the cave churches of the Göreme Open-Air Museum and the Ihlara Valley, as they are among the best examples of surviving religious art from the middle of the Byzantine era in the world. Here, you have the opportunity to view all this from a hot-air balloon. Apart from everything, the villages of Cappadocia, half cut into the hills, are also a kind of attraction. There are boutique hotels where you can lie down in a cave-like setting, which, however, is equipped with the necessary modern amenities.

Pamukkale (translated into English – “Cotton Castle”) is one of Turkey’s most famous natural wonders. Millions of tourists flock to this destination every year, and for good reason. Among the things to do in Turkey, a walk around Pamukkale will leave you with a memory as if you were on another planet. The whole place is guarded by pure white travertine terraces that descend down the slope and look like a snowfield in a green landscape. And this was created by the greatest architect – nature. travertines are the highlight of your trip, here you can still see huge and scattered ruins of the Greco-Roman Hierapolis, an ancient spa town, which lie scattered on top of this calcite hill; the ancient theater and the remains of the city agora, high school, necropolis and large gates. You can take a dip in the mineral waters and walk to the small modern village of Pamukkale below. And if you want spectacular photos, come at sunset, when the travertines emit light. 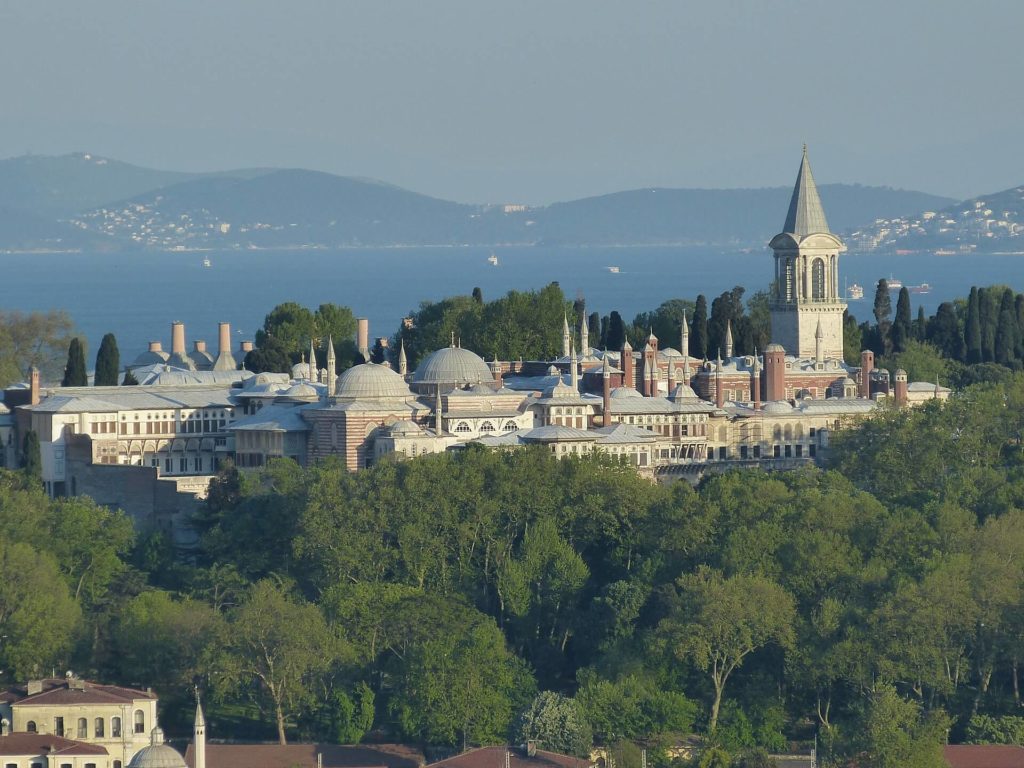 And, again – in Istanbul, the city is located on two continents – Asia and Europe. Topkapı Palace with its indescribable splendor takes you to the world of sultans. In the 15th and 16th centuries, from this place, the sultans of the Ottoman era created an empire that would later extend upward into Europe and down through the Middle East and Africa. This palace is a symbol of Ottoman power and magnificence, which is clearly visible from the interiors, with lush cladding and lavish decor, strewn with precious stones. Once you step into Topkapı Palace, don’t miss the Imperial Council building, where the empire’s business was run by the Grand Vizier. Also, the rich collection of weapons, world-class miniature paintings, and the dazzling rooms of the Harem. The palace is surrounded by meadows, separating you for a while from the city noise. 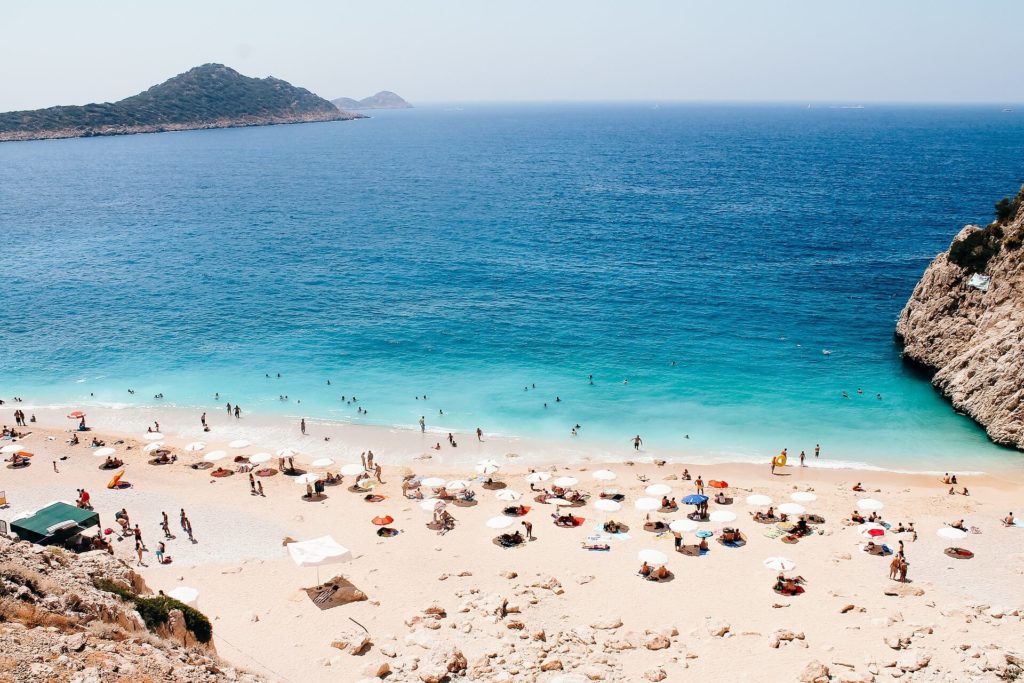 Antalya is a brilliant idea of ​​what to do in Turkey because it is the pearl of the resorts in this country. With its two main beaches outside the city, which are a real sunny paradise, with the old town located right in the city center, with its cobbled alleys surrounded by old mansions dating back to the Ottoman era – all this is great to see, along with your recreation by the sea. One of the highlights of the destination is the Antalya Museum of Antalya, which has a valuable collection of Hellenistic and Roman marble statues. Outside the city is also interesting – lots of attractions, suggestions for day trips to some of the most famous Greco-Roman ruins in Turkey, such as Aspendos, Perge, and Side. 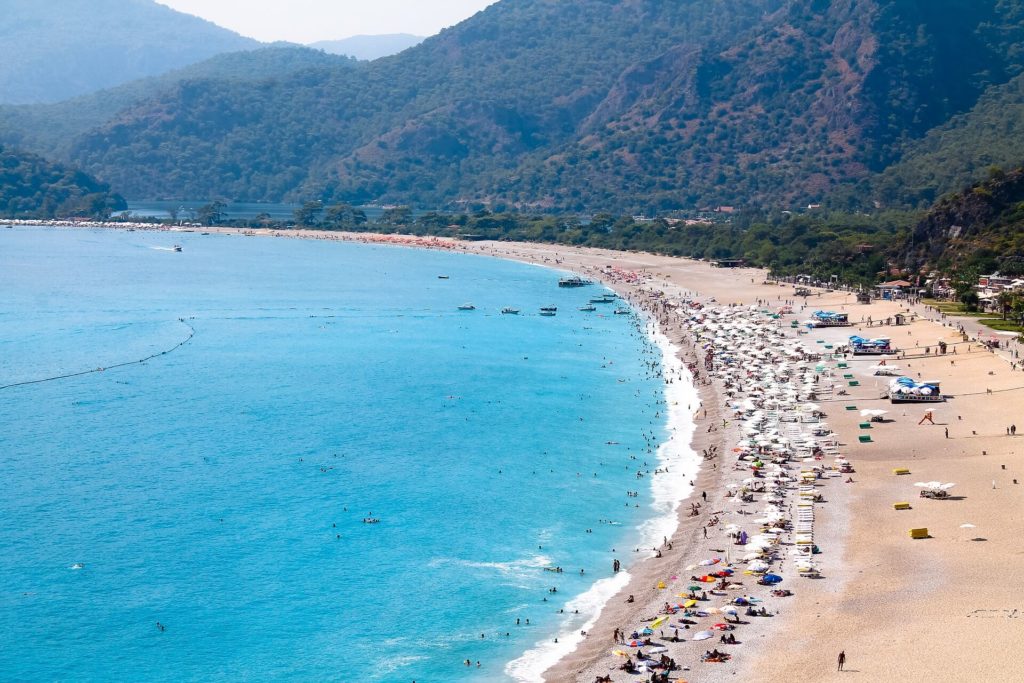 The Mediterranean coast of Turkey is full of ruins and many things to do, beautiful coastal views, and enjoyment. The yacht cruise is the number one activity for visitors to Bodrum and Fethiye and this is no accident. It is worth seeing the natural beauty around steep slopes covered with forests, hidden coves with small beaches with white sand, and many scattered islands. And among the most famous trips is the Blue Cruise, traveling from Fethiye south down the coast to the landing near Olympus, which is home to the interesting fish Chimaera. 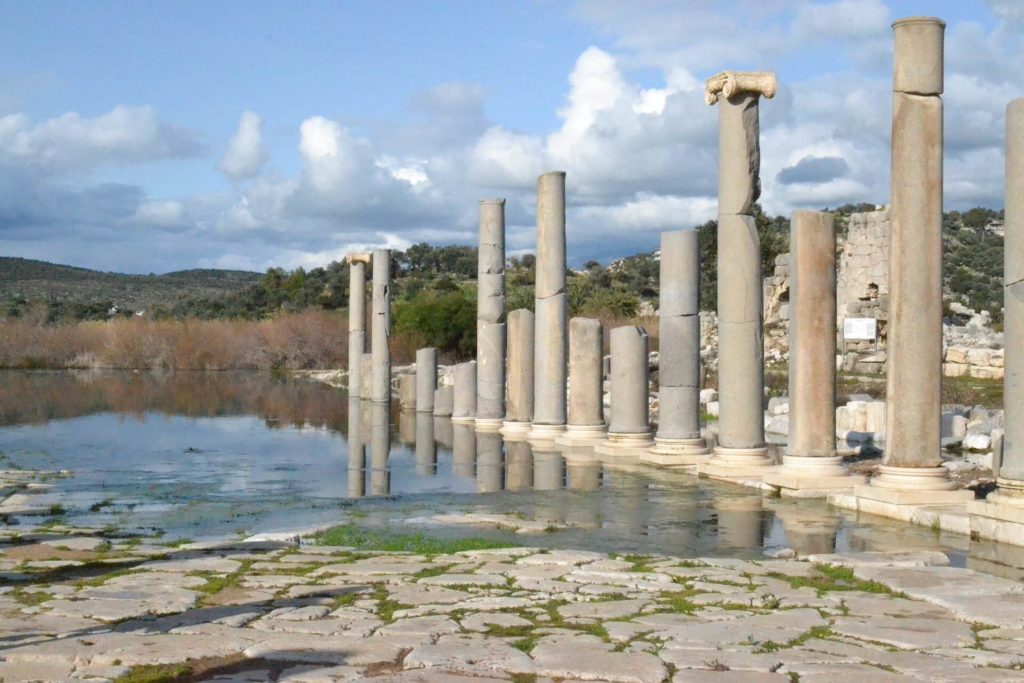 Patara is a sunny paradise that you just have to indulge in. It is one of the most famous sandy beaches, a beach where you can be alone for so much coveted solitude. But there is also something to see – the ruins of ancient Patara, which include a street with colonnades, a restored city parliament, and a theater that can accommodate up to 5,000 people. 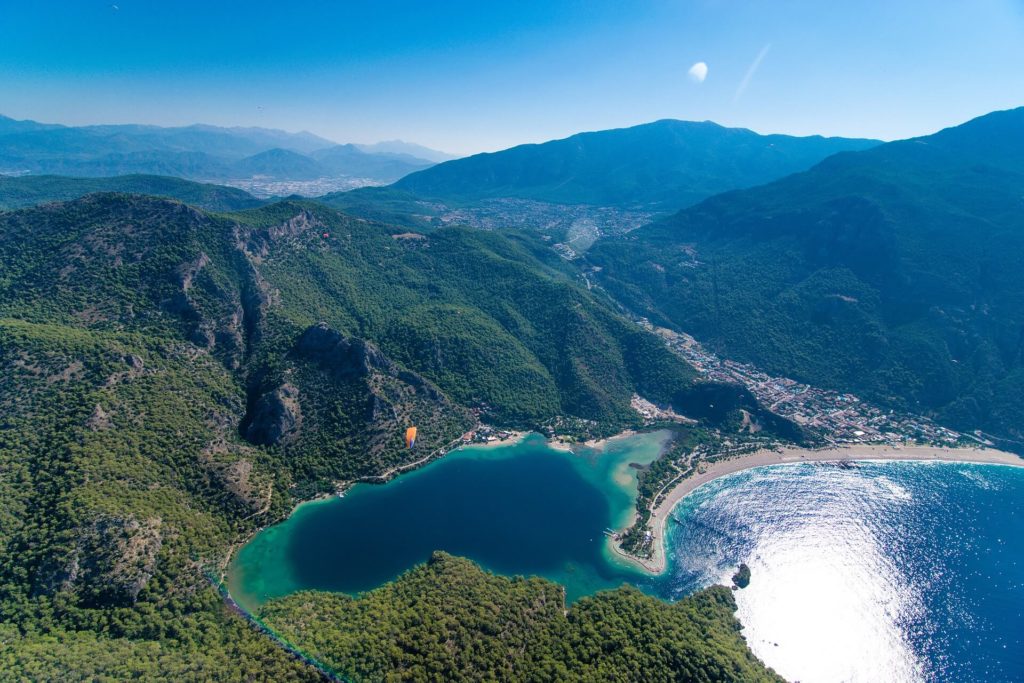 The bay of Ölüdeniz is the most famous beach in Turkey with landscapes that are so perfect in the picture. So pure turquoise-blue water, deep green forest, descending a rock to the beach, with white sand stunning aerial views and a paraglider from the top of the mighty Babadağ (Mount Father). Because of the latter, Oludeniz is also considered one of the best destinations for paragliding in the world. When you see all this live, you will be convinced that perfection was created solely by Mother Nature. 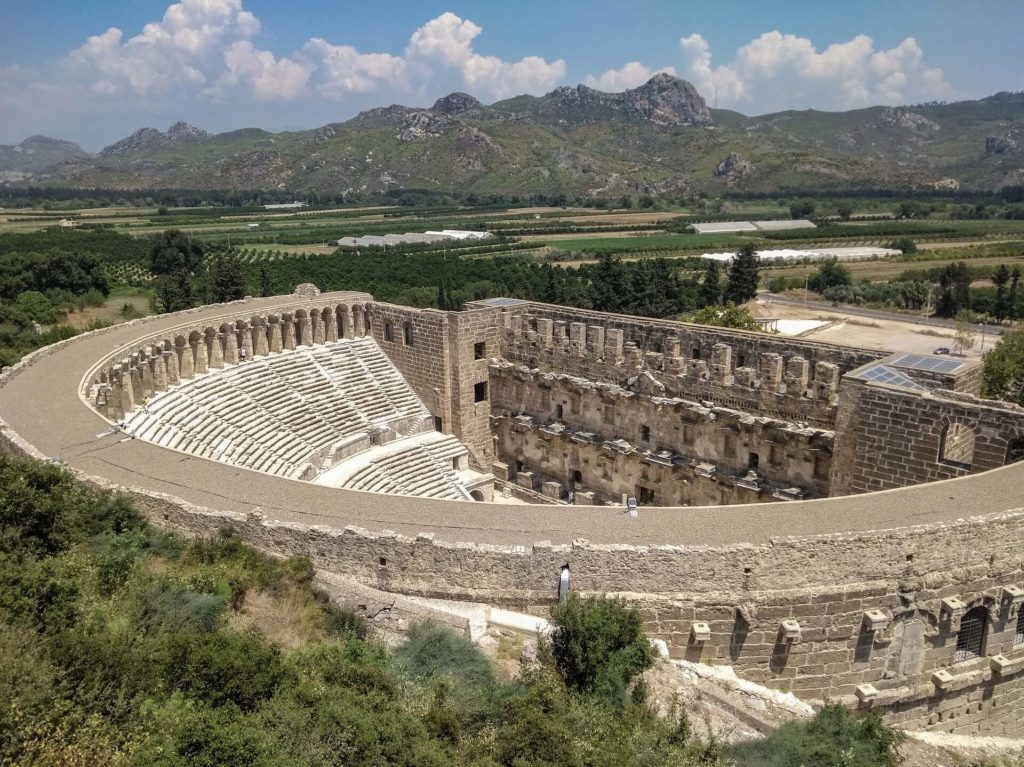 Considered the best surviving example of a theater from the classical era, the restored 15,000-seat Aspendos Theater is one of the best tourist attractions of antiquity. Located south of the resort of Antalya, this theater symbolizes the greatness of the reign of Marcus Aurelius. Apart from the theater as an accent here, you can see around the remains of an aqueduct, an agora, an ancient stadium, and a basilica from the Byzantine era. 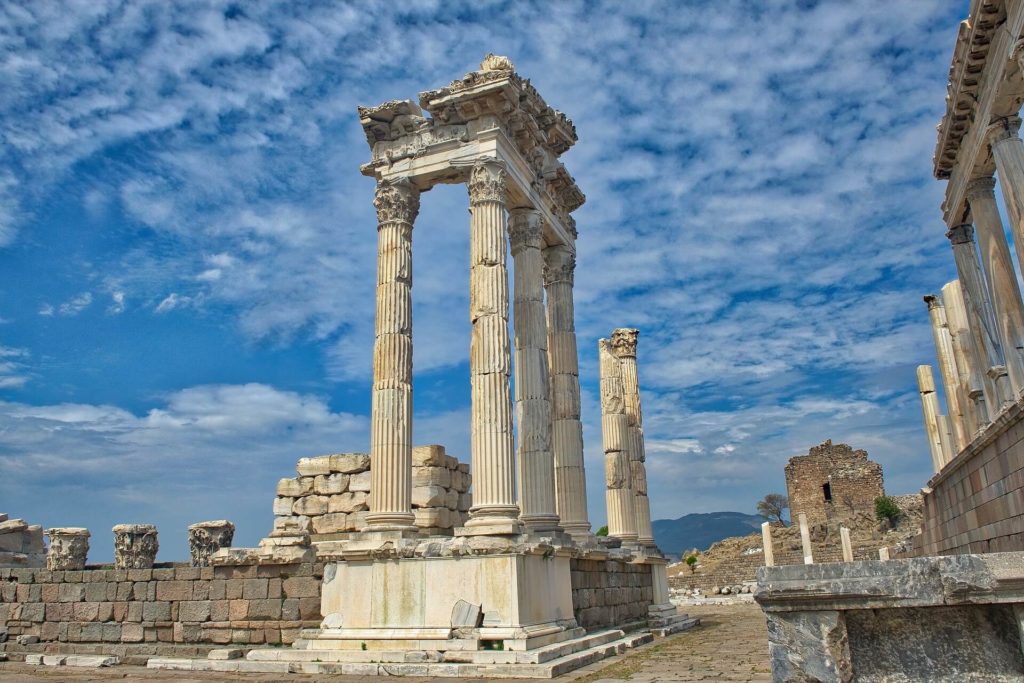 The remaining remains of the temple at Pergamum are home to one of the most important libraries in the ancient world and the famous medical school run by Galen. This remarkable destination in Turkey reveals a view of the ruins and offers an incredible panoramic view of the countryside. Below, the Asklepion area is home to the ruins of the city’s famous medical center. If you are a fan of the classic era, here is the place to feel the atmosphere. 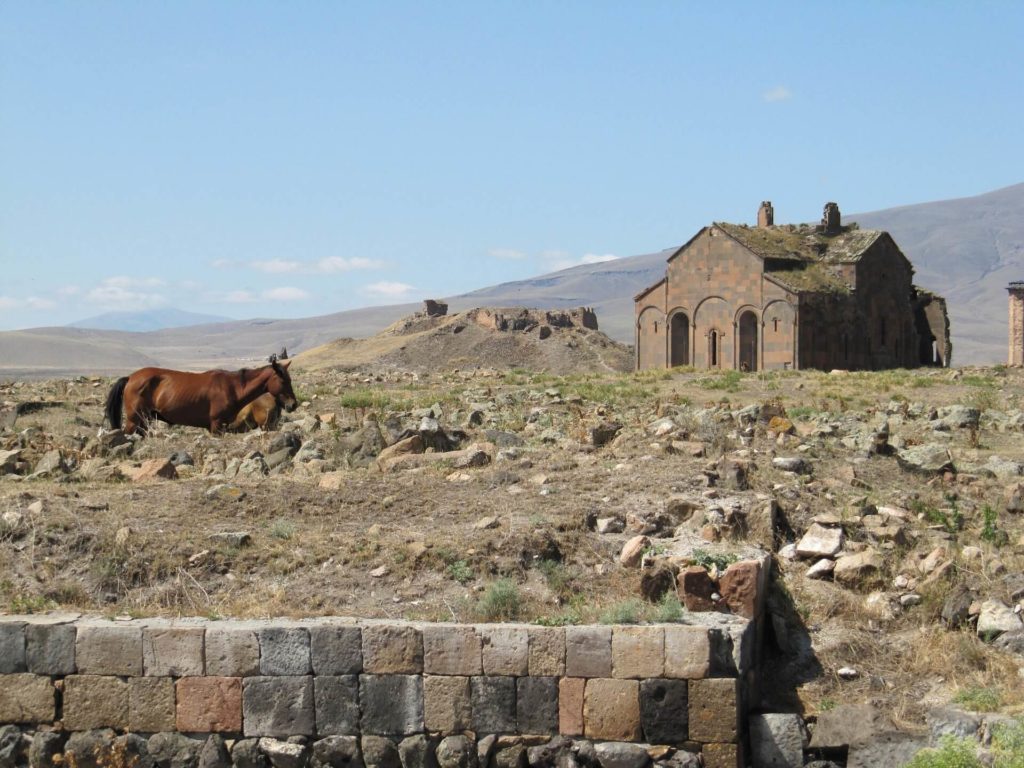 The once-mighty city of Ani on the Silk Road is abandoned in the plains, on the border between Turkey and Armenia. Ani was the capital of the Kingdom of Armenia, and Ani’s golden age ended in the 14th century after the Mongol invasions, the destruction by earthquakes, and the clashes on the trade routes. Now, in this destination, among the most visited in Turkey, you can see remarkable red brick buildings, the Church of the Redeemer and the Church of St. Gregory. You will be impressed by the architecture of that time. See also the Manucher Mosque, built by the Seljuk Turks when they conquered the city in the 11th century. It is believed to be the first mosque built in what would later be called Turkey. 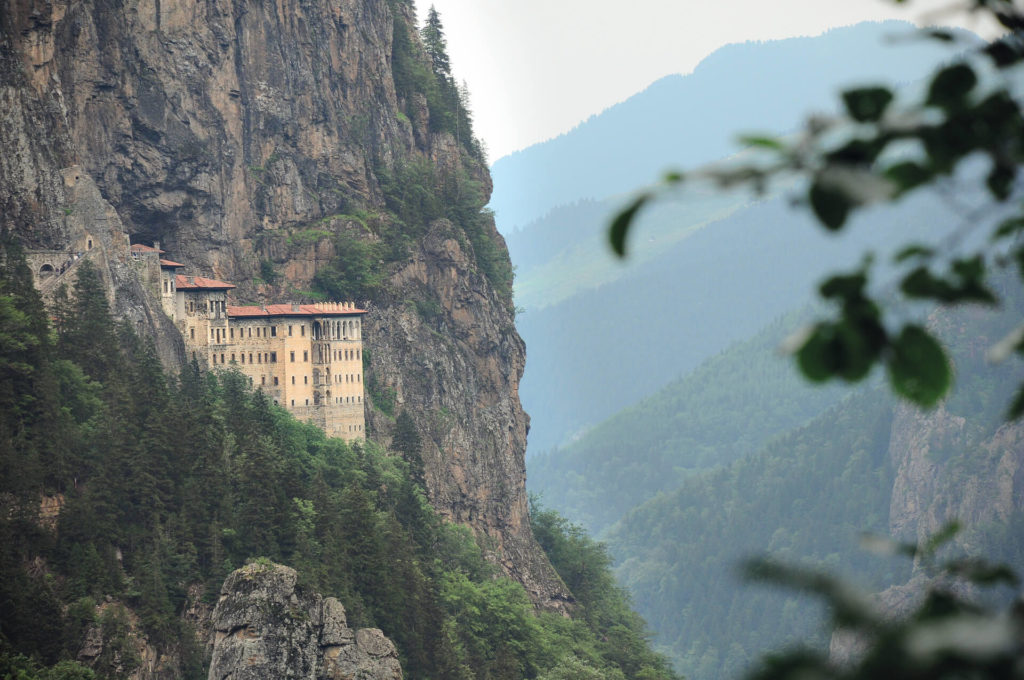 It is difficult to describe in words the atmosphere that evokes the rock-built Sumela Monastery (Monastery of the Virgin Mary). This place is one of the attractions in Turkey for visitors on the Black Sea coast. Walking around this abandoned religious complex, with its church interiors, with impressive ones, is a must for anyone traveling to the northeastern region of Turkey. The monastery was first opened during the Byzantine era and ceased to operate as a functioning religious center in 1923 when monks were forced to leave as part of the Greco-Turkish population exchange. If you want to imagine the life of the monks, go around the cells here. 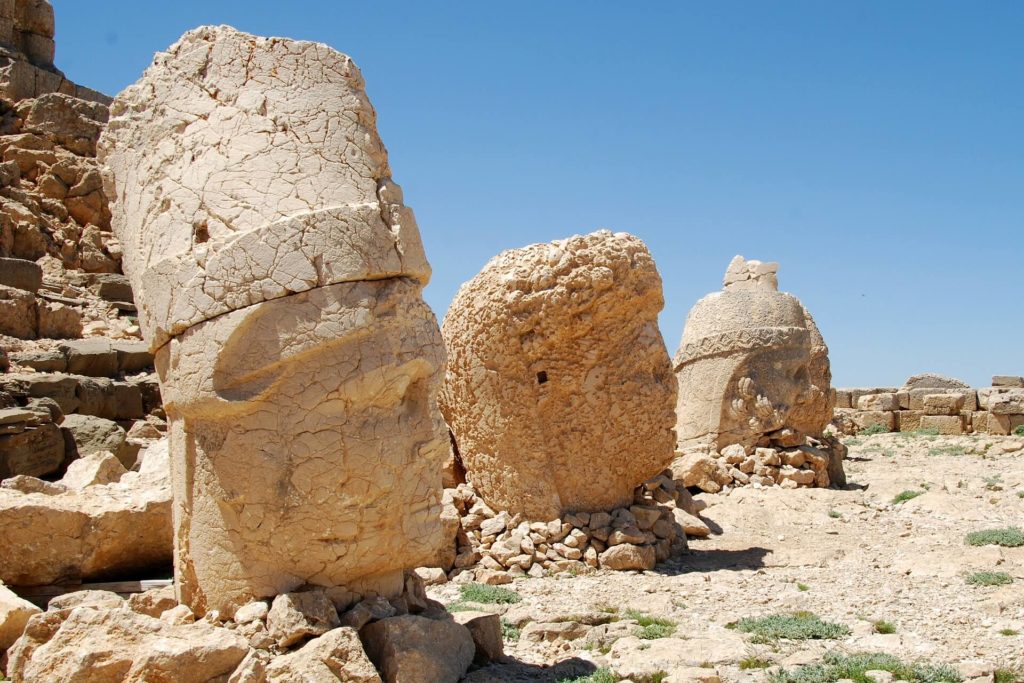 This place is probably one of the strangest and most special archeological sites in Turkey. It represents the huge stone heads of ancient gods looking down from the top. The tomb at the top of Mount Nemrut is littered with the broken remains of once huge statues. The construction work on the top is the work of Antiochus I, ruler of the Kingdom of Commagene, which was once located here, between the Roman and Parthian empires. Antiochus I dedicated this grandiose tomb to himself as a demonstration of its significance. He built a 50-meter artificial peak on top of Mount Nemrut, then supplemented it with statues of himself and various gods. 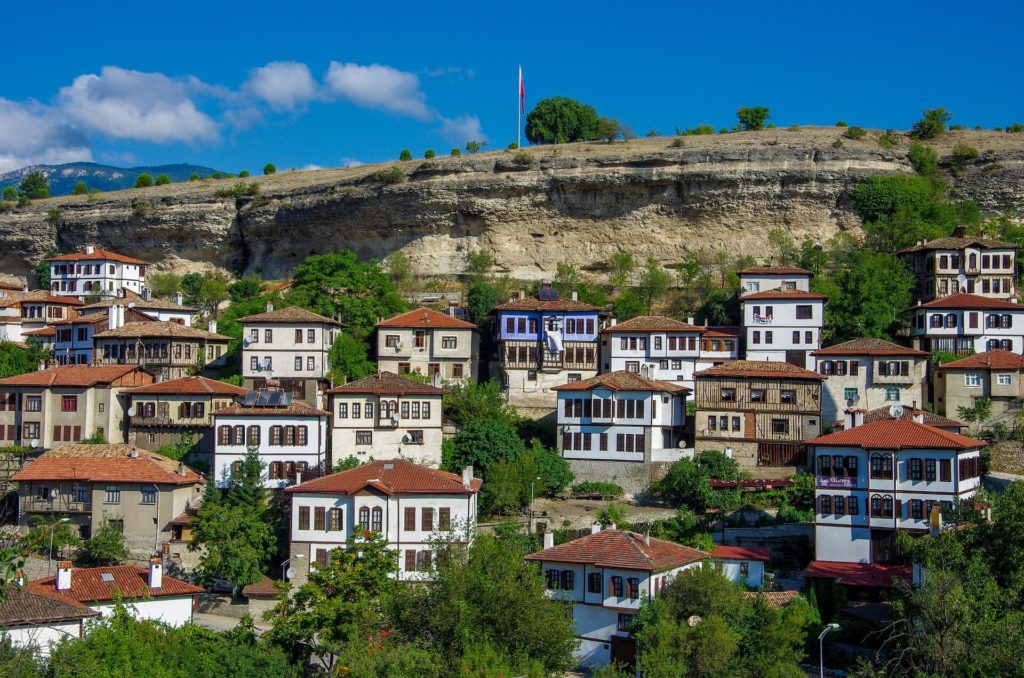 If you are interested in what the best-preserved Ottoman city in Turkey looks like, visit Safranbolu. You will find yourself among winding alleys, restored wooden mansions that were once home to wealthy merchants and now function as boutique hotels and restaurants. Walks filled with admiration and romance, but also nourished with traditional pastries and crafts. You find yourself in something old and idyllic, just like in ancient times.