Less than an hour from Houston, Galveston is known to local and international tourists as a year-round destination with its beautiful beaches and historic center. The city has long been notable, as it had the reputation of being the largest and richest city in the state as early as the 19th century, and for a time was even the capital of the Republic of Texas at the time. Evidence of its brilliance can still be seen in historic buildings and charming mansions.

There is a lot of things to do in Galveston today – it is a modern city with restaurants, cafes, shops, and all the amenities of today, along with its historic sites. Here, in addition to enjoying the beaches, you can visit museums, watch birds, go fishing and indulge in water sports, as well as eat good food. Here are the top places worth visiting in Galveston: 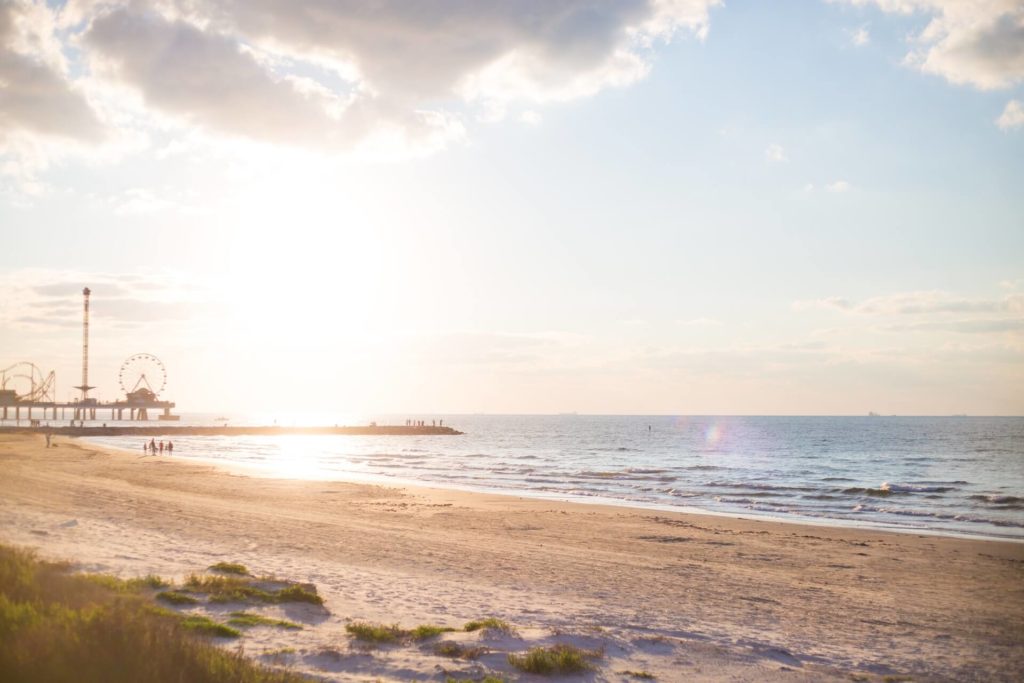 Of course, they are in the first place, but not in importance, but rather as the initial popularity in Galveston. your eyes will delight in turquoise water among a huge area of ​​soft sand. These natural resources are the magnet that attracts millions of tourists from spring to autumn. Behind the beach, there are plenty of restaurants, shops, and hotels, and one of the most popular beaches is Stewart Beach, which is ideal for families. If you are an avid nature lover, there is still what to do on the beaches of Galveston – just head west to Galveston Island State Park, where you will observe the flora and fauna in its natural state.

Here is a place for wildlife lovers. Here you can do bird watching, kayaking, fishing, or just enjoy the natural beach environment surrounded by trails. You will find all this in Galveston Island State Park, with the most popular area being the attractive beach on the ocean.

Pleasure Pier is the pinnacle of the Seawall. This pier was opened in 2012 and has an impressive length of 1130 feet. It was built on the site of its predecessor, which was destroyed by a hurricane in 1961. There is a lot to do here – walks suitable for all ages, games and activities, a restaurant. This place in Galveston is perfect for families with children because there is a lot of fun for the little ones. Pleasure Pier is open every day from Remembrance Day to Labor Day, as well as on weekends in winter.

The historic Strand district of Galveston is a national treasure. This is a remarkable area, consisting mainly of Victorian buildings. Most of these buildings have survived the Great Storm of 1900 and now house classy restaurants, pastry shops, cafes, galleries and antique shops. Here you can go for a walk, enrich your knowledge, eat and shop. This place has important attractions for tourists. You’ll find Pier 19 with the Ocean Museum’s offshore drilling rig and the Texas Seaport Museum. Don’t miss a screening of the film about the Great Storm, a 1900 hurricane that hit Galveston and changed its appearance forever.

An exciting touch to a historic building with specific architecture – this palace was built as a private residence. It is also called Gresham Castle and is listed as one of the most important Victorian mansions in America. Its construction lasted for seven years and was completed in 1893. You will be interested to see the exterior, which is just like a castle with towers, granite, limestone, and sandstone, skillful wood carving, high ceilings, stained glass, fireplaces, and stylish furniture from the high class. Currently, the palace is a national historical landmark and museum.

If you are a family, there are many things to do at the Moody Gardens in Galveston. One of the most special attractions are the three glass pyramids, but the main one is the pyramid of the aquarium, which shows the marine life of the Pacific Ocean, Antarctica, the Great Barrier Reef, the Caribbean, and the Coral Sea. There is also an underwater tunnel, touch tanks, and giant river otters, and penguins. The other interesting feature is the pyramid of tropical forests, which is home to the flora and fauna of the tropics. And the third, aptly named the Discovery Pyramid, focuses on science. The attractions do not end there – there is a water park in Palm Beach with white sands, lagoons, slides, and a lazy river. And more – movie lovers can see the biggest movie screens in Texas in Moody Gardens and enjoy the features of MG 3D and 4D Special FX.

The Bryan Museum is housed in a beautiful historic building that was once the Galveston Orphanage. It houses a valuable and diverse collection of arts and artifacts from the American West. Among the permanent collection are artifacts from the history of the Indians to the Spanish colonial era, as well as the independence of Texas. The gallery offers the art of Texas-born artists as well as those who have traveled around the area, and around the museum building, you will find works by various artists, including Andy Warhol.

Museums are interesting sites that give a lot of information. As for the port of Galveston, it is home to many platforms and vessels. They testify to Galveston’s significant role in the Gulf of Mexico’s oil and gas industry. Realistically, here you get a clear idea of ​​the energy business. In this museum, built on a real oil platform, you will see many exhibits. Highlights at this location include a visit to the pipe deck, where some of the larger equipment needed to drill more than 200 wells on the platform is kept, as well as interactive displays that illustrate the entire process – from exploration to extraction.

Would you like to see the tall ship Elissa, built in 1877, designated the best restored historic one in the United States? Here’s the place – at the Texas Seaport Museum. This same old ship still goes to see regularly. You will be able to hear about her fascinating story, including saving him. Other highlights include the nearby Seawolf Park, where you can peek at a US Navy submarine from World War II, and the USS Stewart, a destroyer from the same period.

We present to you another elegant building of Galveston – the Grand Opera of 1894, which is a perfectly restored Victorian theater that has withstood fierce hurricanes. When you enter the main entrance, you will see a plaque on the wall indicating the level of the high water sign from Hurricane Ike, which occurred in 2008. There are many musical and theatrical performances, as well as a selection of fun performances for children and adults. Moreover, the Grand Opera of 1894 is the official opera of the state of Texas since 1993. The main performance hall has three seating levels and side balconies, and if you can’t get inside, you can watch interesting displays from the windows on Post Office Street.

Among the things to do in Galveston, you will be enchanted by the 28,000-square-foot home built in 1895, considered one of the best of its kind in the state of Texas. It is no coincidence that it is registered in the National Register of Historic Places. The interior of this magnificent Victorian mansion features stained glass windows, custom-made woodwork, decorative tiles and plaster, red brick, numerous arches, antiques, paintings, and other works of art.

Have you heard of the Railway Museum? There is one in Galveston – a fun attraction for young and old. The museum has six permanent exhibits, representing a solid collection of steam and diesel engines, passenger and freight cars, as well as related artifacts. The attraction is the famous streamlined passenger train of Texas Limited and the impressive diesel Santa Fe. However, this museum is not just for equipping trains, as a visit to the National Gallery will take you back to 1932, when people wore fashionable hats, dresses and costumes to travel by train. Explore the interesting waiting area, which is realistically recreated to the smallest detail.

Galveston is a city where attractions and activities are plentiful for every tourist. Its beaches alone are over 15, and museums and history are everywhere. Don’t miss this wonderful destination once you’re in Texas – there’s something to experience and remember.