We live in a world, vast and beautiful, filled with seemingly strange but beautiful places that you secretly or openly want to visit. In the following list, the places look like the plot of a fantasy or horror movie, but the good news is that everything is real – as well as nature itself, which never ceases to amaze us with its artistic skills and unusual phenomena for our perceptions. Or do alien civilizations have a hand? Judge for yourself…

The Rainbow Mountains of China 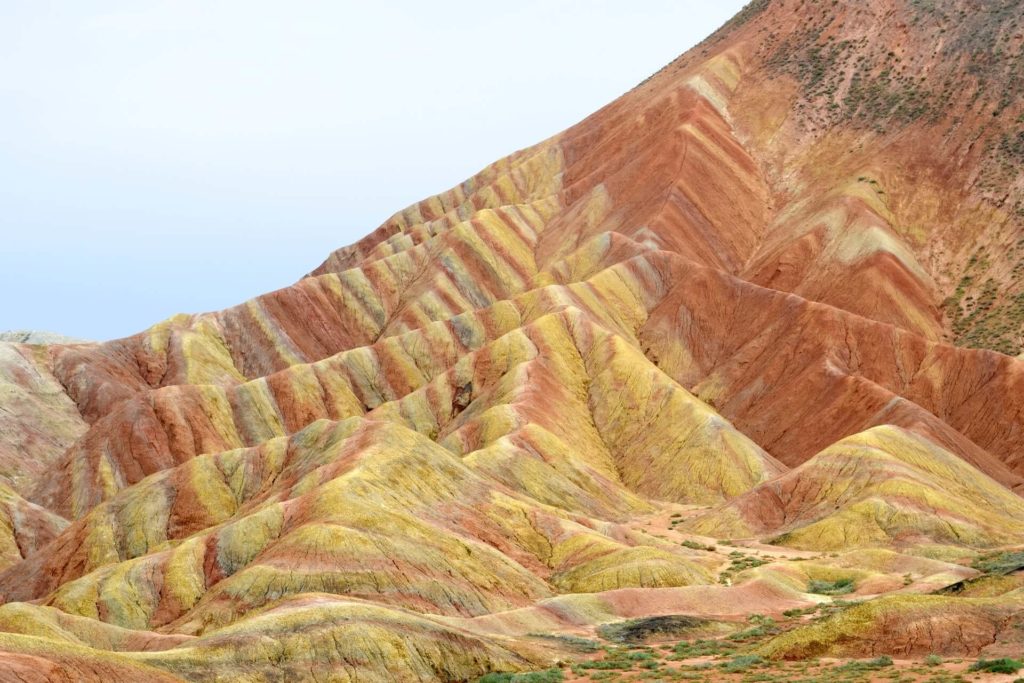 Photo by Aaron Greenwood on Unsplash

The Rainbow Mountains in China resemble a spiral, colorful lunar landscape. As a result of mineral deposits, the place was formed, which now has the status of a national park. These deposits have eroded in unusual forms over millennia. Inside the park, there is an infrastructure including wooden stairs and platforms which was created to be visited by tourists, as in 2011 it was declared a national natural park. All the visitors can reach the tops of the hills but so as not to harm the characteristic landscape.

Discover the third largest meteorite crater lake in the world, created almost 50,000 years ago when a meteorite crashed into the ground in the new Indian state of Maharashtra. This collision caused a huge crater with a length of 2 km and a depth of 170 m. Scientists believe that this meteorite is still embedded about 600 meters below the southeastern edge of the crater. Also, according to them, this is the only one hypervelocity natural-impact crater in basaltic rock. This means that despite its strange appearance, the place is so peaceful and ideal for relaxation, with its shallow lake, seabirds, and the surrounding desert. Experts say the water in the lake is alkaline and has therapeutic benefits for the skin.

Do you love cats? They are abundant on the Japanese island of Aoshima, called Cat Island because there live mainly cats – over 150, and the inhabitants, members of the human race, are mainly engaged in fishing and number only about 500. On the island, there is a small town with an interesting maze of old wooden houses, a shop and an old-fashioned school – just like in a typical village. One thing makes difference though: lots of cats around.
…and go to North America:

Canada’s Spotted Lake is a unique natural phenomenon and, accordingly, a famous tourist attraction. It is one of the most unusual places in the world, so deservedly is listed here. Its extraordinary appearance is due to water evaporation due to the hot summer sun. This water has a high content of minerals, which results in crystallization, leaving green circles with white frames on the surface of the water.

Glass Beach is a beach located in MacKerricher State Park, California. Its appearance is indicative of
the inexplicable for us skills of Mother Nature, which is able to turn garbage into a valuable treasure. Yes, because it really was a landfill, probably because of its isolated location. People have dumped everything here, even cars, but one day the authorities put an end to this disgraceful practice. Then the sea worked a miracle – the impressive ocean waves turned the rubbish into pebbles that looked like jewelry and the beach looked like an open jewelry store for precious stones.

Fly Geyser is a truly magical sight. The geyser is a small geothermal and is located in Washo County, Nevada, and the first geyser was formed in 1916 during irrigation drilling. Fly Geyser is currently a tourist site and can be visited because it is open from April to October, although it is not intended for mass tourism. 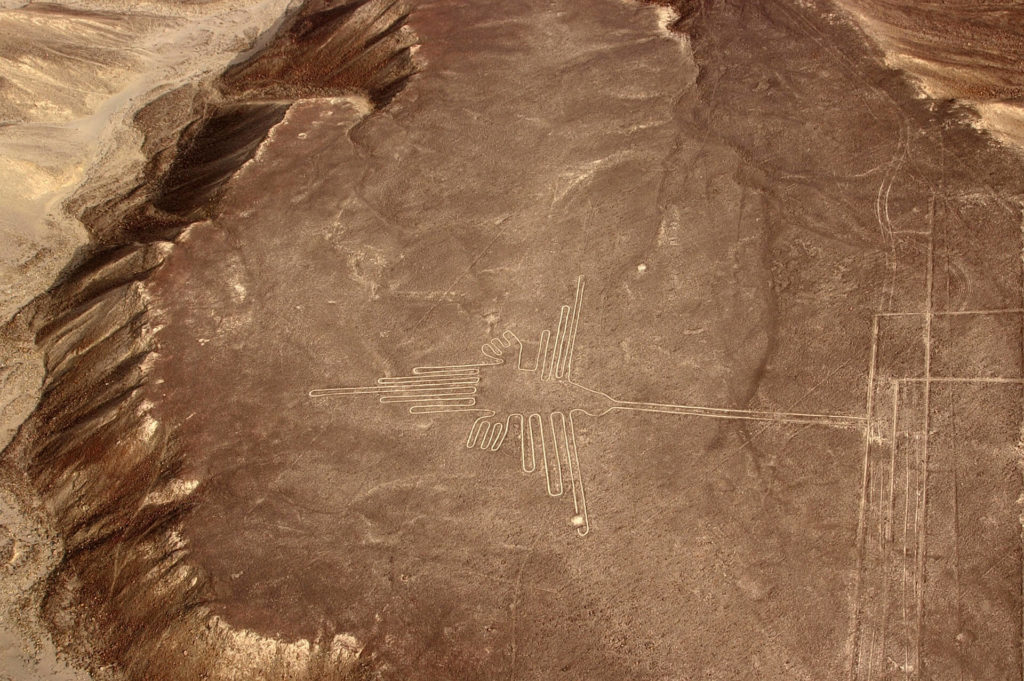 The Nazca Plateau is an ancient and remarkable place in southern Peru. One of the most inexplicable phenomena is there – shapes and lines that can only be seen from the air or from a metal observation tower. Who made them and how, this remains a mystery, at least for now. Some of the forms reach a length of 200 m, and each of them is made in a continuous line.

This amazing lake was discovered in 1802 on the territory of the largest of the islands in the Recherche Archipelago in Western Australia. It looks as if a giant artist has dropped a pink spot – and to this day this lake retains its deep pink color all year round. The color is said to be due to the high salinity combined with the presence of salt-loving algae and pink halobacteria.

…And see the miracles in the Old Continent: 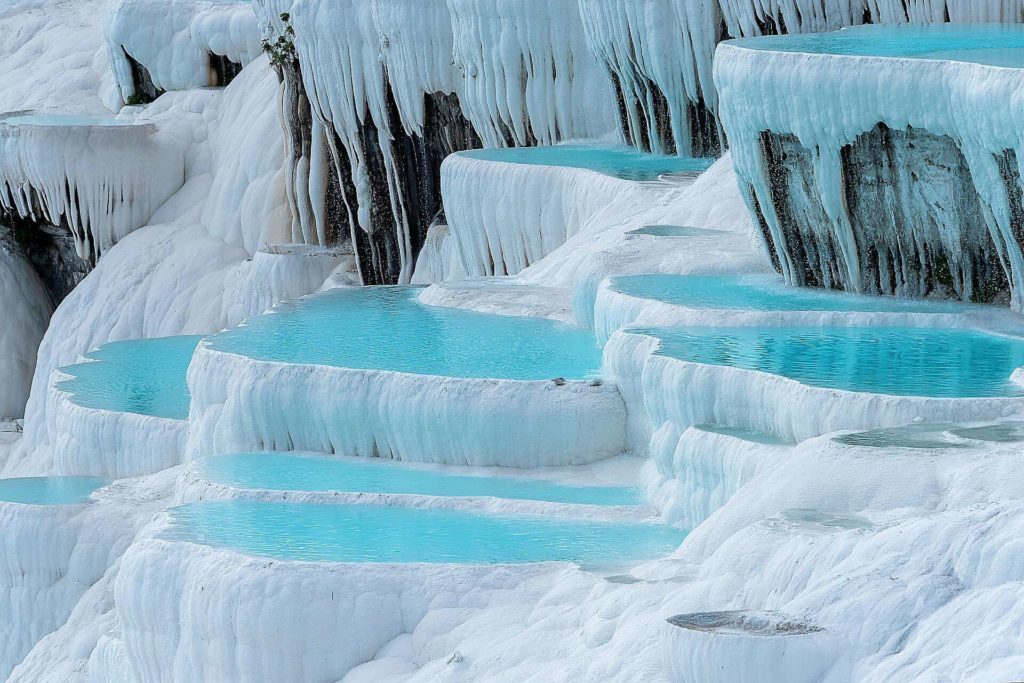 In Turkish, “Pamukkale” means a castle made of cotton. The place is a famous tourist destination because it is made of shiny white calcite travertines, which overflow warm, mineral-rich waters in the mountains above the village. Above the travertines are the ruins of Hierapolis, an ancient Roman and Byzantine SPA town, as well as museums that tell of this extraordinary creation of nature.

Christ of the Abyss, Italy

Now, we are talking about human work, although the place is among the most unusual in the world. It is because the object is connected to nature forever. In 1954, the bronze statue of Jesus Christ, sculpted by the artist Guido Galetti, was lowered 17 meters down into the sea, in order to bless the waters. The place was not chosen by chance – there the Italian diver Dario Gonzatti died in 1947. The statue can be seen by visitors by diving or by boat.

Planet Earth will not cease to amaze us with its creations and there will surely be more unusual places  Moreover, there are probably existing ones, still undiscovered by people. A trip to such a place will mark your life in a unique way because the feeling of being close to a natural wonder is quite exciting. Near or far from us, the wonders of nature are in our home – the world.

10 of The Oldest Churches in the World